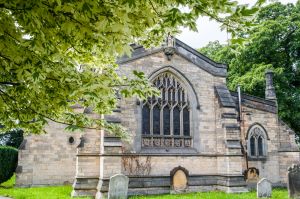 Standing beside the ruins of Slingsby Castle (not accessible) is the impressive medieval church of All Saints. The first known church here was in 1157, but that early building was rebuilt in the 15th century. Much of the current building is the result of a Victorian restoration financed by Admiral Edward Howard, but the interior boasts fine stained glass by Clayton and Bell of London and a 17th-century altar.

The most interesting historic feature is the 13th-century effigy of a knight. The style of the knight's armour suggests a date of about 1250. The knight's shield bears the arms of the Wyvillle family.

Local tradition says that the knight was a crusader who went with Prince Edward on the 9th and final Crusade. The tale also says that he fought and killed a great Serpent that preyed on travellers along the road to Malton.

Near the effigy is a 16th-century tomb slab of Reverend Sir John Fons, whose brass is in the south aisle.

A more modern tomb is that of Thomas Snowball, which was crafted by Thompson of Kilburn and bears the trademark carved mouse that Thompson was famous for. Hanging in the nave is a lovely Italian corona that came from Sledmere House.

Bits of medieval grave slabs are built into the lower courses of the tower. 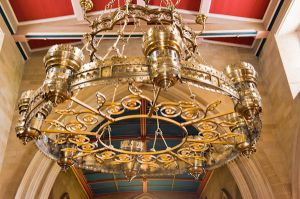 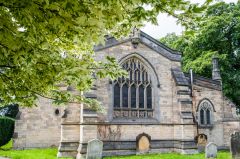 More self catering near Slingsby, All Saints Church >>

More bed and breakfasts near Slingsby, All Saints Church >>