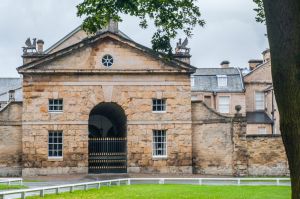 Hovingham Hall
Hovingham Hall is a historic 18th-century stately home in the heart of beautiful Ryedale, Yorkshire that was the childhood home of the Duchess of Kent. Hovingham has been the home of the Worsley family for over four centuries since it was built by Thomas Worsley in 1750.

Rather than calling in a popular architect, Worsley designed the grand Palladian house himself, in the process creating one of the finest examples of Palladian style in the country.

Thomas Worsley had two passions in life; architecture and horses (indeed, he is said to have taught the future George III to ride). At Hovingham he allowed these twin passions full reign. He created a glorious neo-classical house that has a very unusual entrance - right through a Riding School.

There has been a Worsley presence at Hovingham since long before the Hall was built; the family, which originated in Worsley, Lancashire, purchased the Hovingham estate in 1563.

The interiors feature high, vaulted ceilings, and fine collections of furniture and paintings. Outside, the gardens are a delight, with yew hedges and the oldest private cricket ground in England.

Cricket is one of the traditional features of Hovingham Hall, played on the field directly in front of the house. Hovingham played host to regular cricket matches during the 19th century, and a Hovingham team is known to have played an All England team in 1858 - and lost. Many of the finest 20th-century cricketers in England have played on the Hovingham ground.

There are several Worsley tombs in the Saxon church of All Saints, immediately beside the Hall. Other popular historic houses nearby include Duncombe Park and Castle Howard, both within seven miles of Hovingham.

More self catering near Hovingham Hall >>