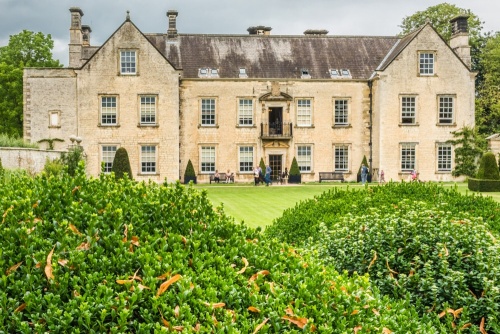 Nunnington Hall is a beautiful Elizabethan manor house beside the peaceful River Rye, on the edge of the North York Moors.

The first written record of a residence at Nunnington comes from the 13th century, but the Hall that we see today was begun by the 1st Marquess of Northampton, William Parr (1513 – 1571), brother of Queen Katherine Parr, Henry VIII's sixth wife, and one of the most powerful men at the court of Edward VI. Parr was involved in the ill-fated attempt to place Lady Jane Grey on the throne after Edward VI's death and lost his estates as a result. 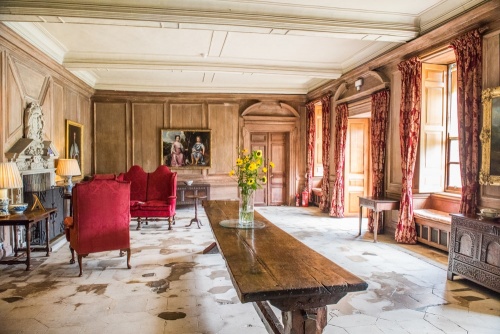 Nunnington was let to a succession of tenants, including Dr Robert Huicke, court physician to Henry VIII, Edward VI, and Elizabeth I, as well as personal physician to Queen Katherine Parr.

Huicke never actually resided at Nunnington and left the management of the estates to his stewards. In 1583 Huicke sublet the manor to Thomas Norcliffe, and the Norcliffe family were responsible for some of the major alterations to the Elizabethan house that we see today.

The house passed through a succession of owners and lessees until in the mid-17th century it passed to Sir Richard Graham of Netherby. Graham became Viscount Preston in 1681, but in 1689 he had his estates seized for supporting James II. He was later pardoned and the Hall remained in the Graham family until the death of Charles Graham, the 3rd Viscount, in 1739.

The estate passed to jointly to Charles's aunts, one of whom was Lady Widdrington. From her, Nunnington passed to the Grahams of Norton Conyers until 1839 when the estate was purchased by William Ruston, son of a wealthy Liverpool merchant.

One of the Rutson heirs was Margaret, who with her husband Colonel Ronald Fife became the owner in 1920. The Fifes embarked on a programme of restoration that helped bring the Elizabethan building back to something approaching its original splendour until Nunnington was granted to the National Trust in 1952. 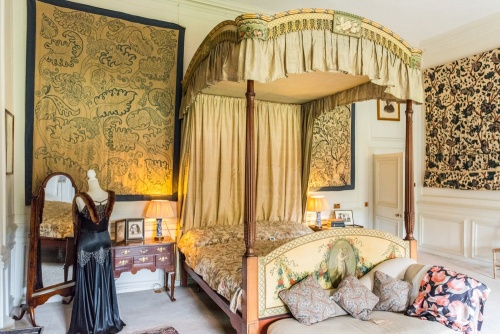 The oldest part of the current house is the Stone Hall, part of the original 16th-century building. This chamber is decorated with animal skins and hunting trophies collected by Colonel Fife, and a collection of armour. it is possible that this chamber was an Elizabethan great hall.

Lord Preston's bedroom has been dressed up as an Edwardian dining room and decorated with portraits of the Graham family owners.

Other rooms include the 17th century Oak Hall, remodelled by Lord Preston. This room has beautiful wooden panelling, which was originally painted but was stripped bare in the Edwardian period as fashions changed. Bedrooms on the first floor have been furnished as they were during the ownership of Margaret and Colonel Fife. 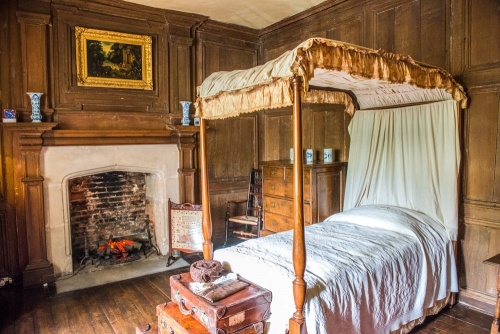 One of the unusual features of Nunnington Hall is the Carlisle Collection of miniature rooms. This remarkable collection was created by Mrs FM Carlisle over 4 decades. There are 16 miniature rooms, fitted out with furnishings at exactly 1/8 their original size. Each tiny tableau is fully furnished with minute furniture, exquisitely detailed, made from wood, silver, porcelain, ivory, and glass.

I can tell you from personal experience that our daughter, aged 8, adored the miniature rooms - she found them much more interesting than the full-sized historic rooms they were set in! 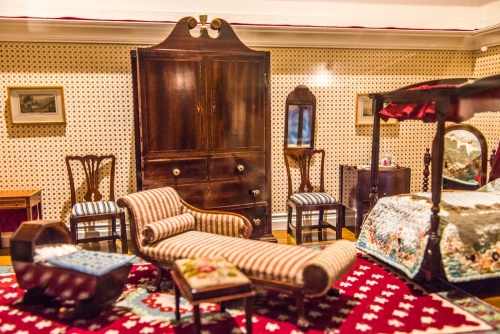 A miniature room setting in the Carlisle Collection

There are 8 acres of gardens at Nunnington, but the main garden is a walled area to the south of the house. Beyond the walled garden are extensive orchards and wildflower meadows. The gardens have been fully organic since 2002. There is a wonderful mix of formal gardens with clipped topiary and sheltered beds, mixed with avenues of trees leading to wilder garden and parkland close to the river.

The National Trust offers a joint ticket to Nunnington and nearby Rievaulx Terrace (of course if you are a Trust member you get in free to both properties anyway!).

Our family had a wonderful time at Nunnington. The children, then aged 8 and 12, burned off plenty of energy running about the extensive gardens, while the adults enjoyed the beautifully restored house interiors. Nunnington is a delight, not oppressively ornate as some stately homes can be, but a fascinating manor house with fascinating architecture and furnishings spanning eras from Elizabethan to Victorian, to Edwardian.

While in Nunnington don't miss the medieval parish church of All Saints and St James. The church boasts the 1325 effigy of Sir Walter de Teyes, the lord of the manor. 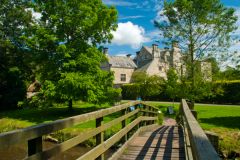 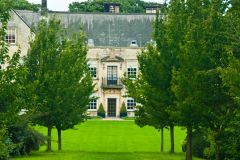 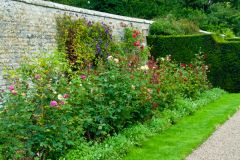 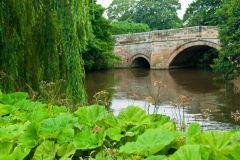 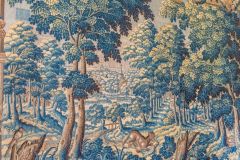 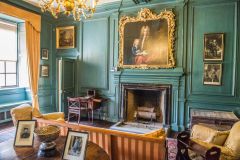 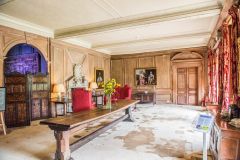 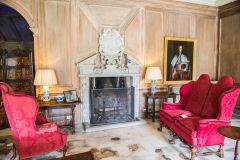 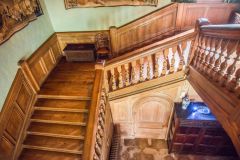 More self catering near Nunnington Hall