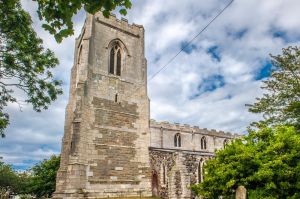 You can't go much further south on the Holderness peninsula than Easington (if you do, you'll get wet). The church dates to the Norman period, with a 12th-century north aisle and 13th-century south aisle. There are a 14th-century clerestory and west tower, and a 15th-century chancel.

Set into the wall of the north aisle is a lovely Early English doorway that may have been brought here from Birstall (Burstall) Priory, perhaps when that monastery sank into the Humber River due to erosion. Some of the north nave windows are made using Saxon grave slabs and evidence of the Saxon carvings can easily be seen.

There is much of great historical interest in the interior; perhaps the most interesting to an architectural historian is a very rare free-standing piscina in Early English style. The piscina was found during renovations in 1863, set into a wall above the east window.

In the south wall of the chancel is a stained glass window containing the heraldic arms of the Duchy of Lancaster, inserted to mark the 600th anniversary of the landing of Henry Bolingbroke, Duke of Lancaster, and soon to become Henry IV, at Ravenspur in 1399.

On a pillar at the south-east end of the nave is an intriguing piece of graffiti depicting a boat that has been variously described as a 17th-century Spanish galleon and a Viking longboat. Nearby in the Lady Chapel is a very nice 17th-century monument to John and Joan Overton.

The most famous feature of All Saints is the Easington Imp, a deliciously wicked little carved figure set in the splay of the northernmost column capital of the tower arch. 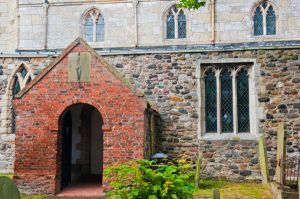 More self catering near Easington, All Saints Church >>

More bed and breakfasts near Easington, All Saints Church >>