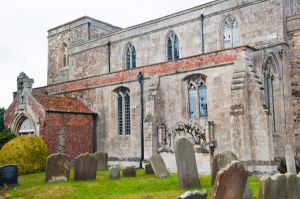 It isn't easy to get to Welwick; it is situated off the beaten path in the most southerly area of the Holderness peninsula, but it is well worth the trip, for the church of St Mary is full of historic interest, with a fantastic late 14th-century tomb and associations with the Gunpowder Plot.

The 14th-century tomb stands in the south aisle, built into the wall. It is an astonishing creation, highly ornamented, and bears a distinct resemblance to the fabulous Percy tomb at Beverley Minster. So strong is the resemblance that it seems very likely that the tomb was built by the same team of craftsmen responsible for the Percy tomb.

But who was the Welwick tomb built for?

We simply don't know. There is no apparent indication on the tomb itself, though there are heraldic shields to the Plantagenets, Edward the Confessor, and the East Angles set into the wall above the tomb. 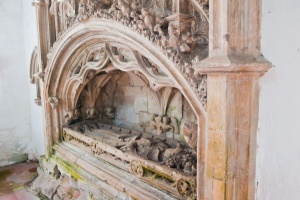 The tomb itself shows an elaborate ogee canopy, with extravagant decoration, above a niche. In the niche is a highly decorated table supporting an effigy in long robes. This was originally thought to be a woman, but closer inspection reveals that it is a cleric in church vestments.

One long-held tradition suggests that the deceased was a member of the Albermarle family, and the tomb was brought here from Burstall Priory after the Dissolution of the Monasteries. Another suggestion is that it represents William de la Mare, Provost of Beverley Minster between 1338 and 1362. Whoever the tomb was built for, it is a wonderful example of 14th-century work, and an unexpected delight to find in a simple country church.

Beside the tomb is a 13th-century stone coffin found under the chancel, and at the west end of the church is a fragment of a 14th-century coffin lid found at nearby Plowlands Farm. The quality of the engraving suggests that the coffin lid was for the grave of an important cleric.

The other major historic feature of the interior is in the north aisle, where a very fine brass is set into the floor. The brass commemorates William (d. 1621) and Ann Wright, of Ploughland, in Welwick parish. The detail of effigies is quite wonderful, especially that of Ann Wright (d. 1618), which shows her wearing an Elizabethan ruff collar and an elaborate headdress.

Both brothers became involved in the Gunpowder Plot, and tradition suggests that Plotters' Barn, near Ploughland Farm, was used as a meeting place by the conspirators. It was Christopher Wright who discovered that the Plot had been revealed, and the brothers fled to Holbeche, in Warwickshire.

There they were killed in a skirmish with men sent by the Sheriff of Warwickshire. In a tragic twist, the Sheriff was not even aware of the Gunpowder Plot but sent his men to arrest the conspirators for a common felony. The conspirators, assuming their role in the Plot was known, decided to fight rather than flee, and were killed.

Other features of note at Welwick include the east window, with lovely Victorian stained glass inserted in memory of Sarah Fewson (d. 1877) by her mother. A small glass display case exhibits fragments of quill pens found within the walls during renovations. The chancel screen dates to 1460-1480 and the 17th-century porch has a much-worn carving of the Madonna and Child in a large canopied niche above the entrance.

Verdict: A delightful country church, full of historic interest. Well worth a visit.