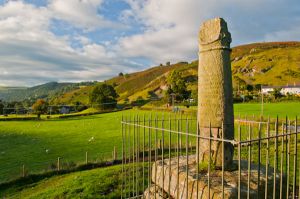 Eliseg's Pillar is a 9th-century stone cross erected by Cyngen, the last king of Powys, in memory of his great-grandfather, King Eliseg. The pillar now stands to a height of just over six feet, but it was originally at least twice that height, and had a large cross on top.

The original cross was an imposing structure, so large that it provided the name 'Valle Crucis', or 'Valley of the Cross', for the entire valley and the nearby medieval abbey.

Who was Eliseg? Some accounts say that he was such a powerful king that Offa of Mercia built his famous dyke to keep Eliseg penned inside Wales.

It has been suggested that the Pillar was more than a memorial, but a rallying cry to the Welsh to fight back against the encroaching English. The carved inscription is very worn but can be still made out in places.

Today the pillar stands in a farmer's field, just off the A542, immediately north of Valle Crucis Abbey, another site in the care of Cadw, Welsh Heritage.

You can easily park at the abbey and walk along the road to the pillar. I recommend good footwear, as the approach to the pillar across the farm field can be muddy in wet weather, and there are plenty of sheep about!

More self catering near Eliseg's Pillar >>