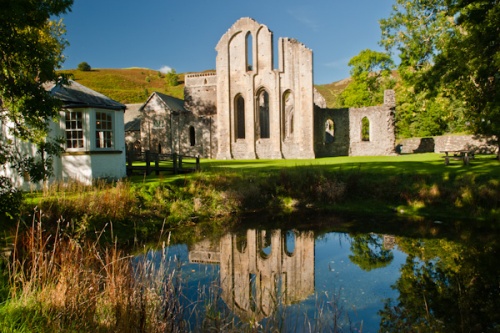 In a steep-sided valley north of Llangollen lies one of the most attractive historic sites in Wales; the ruins of the medieval Cistercian abbey of Valle Crucis. The name means 'valley of the cross', and refers to a worn 9th-century cross known as Eliseg's Pillar which stands a few minutes stroll up the valley from the abbey gates.

The pillar stood in this green valley, watching over the Eglwyseg River (a tributary of the River Dee) for over 4 centuries before 12 monks arrived in 1201 to found a new abbey. The Cistercians tended to seek out remote locations for their abbeys, far from the temptations of civilisation, and Valle Crucis must have seemed an idyllic location to them.

The patron of Valle Crucis was Madog ap Gruffudd Maelor, king Powys Fadog, and the monks came from Strata Marcella, outside Welshpool. Valle Crucis was the last Cistercian monastery to be founded in Wales.

The original site chosen for Valle Crucis had one small problem; there was a village in the way. To ensure the solitude that the monks required, the entire population of the village of Llanegwerth was forcibly moved to Stantsy, near Wrexham. 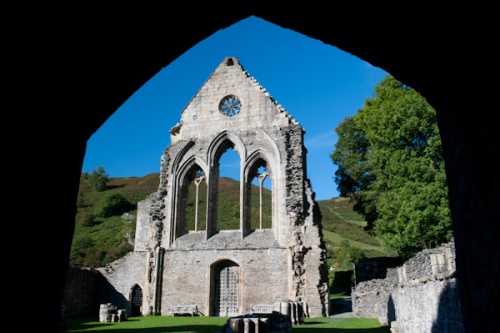 The west wall and rose window

Only some villagers received compensation for the loss of their homes. The new abbey adhered to the traditional Cistercian lifestyle, with a community of choir monks, whose lives focussed on devotion, and a community of lay brothers to actually do all the manual labour needed to keep the community functioning.

Abbey life centred on ranges of buildings around a cloister. On one side was the church, on another, the lay brothers' dormitory and refectory, opposite a similar range for the choir monks. The original ranges provided accommodation for about 20 choir monks and double that number of lay brothers. 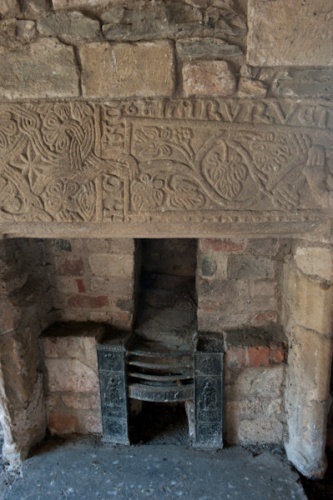 The abbey founder, Madog ap Gruffudd Maelor, died in 1236 and was buried in the abbey church, which had already been completed. But all did not go smoothly with the new abbey; a severe fire swept through Valle Crucis in that same year of 1236.

You can still see discoloured stones from the flames in the south range and the lower levels of stones in the church. Much of the rebuilding had been completed when the abbey suffered again during Edward I's campaigns against the Welsh in 1276 and 1282. Edward did offer some compensation to the monks for damages done by his men, which certainly helped.

In the early 14th century, the abbey church was enlarged and a wonderful western gable with a rose window added under the rule of Abbot Adam. The number of monks fell in the 14th century, possibly due to the devastating effects of the Black Death. In the early 15th century Valle Crucis suffered again during Owain Glyndwr's rebellion.

Once more the monks rebuilt, and created the wonderful chapter house with its vaulted ceiling that is one of the real highlights of the abbey. Prosperity increased during the late 15th century and the abbey became known for its hospitality.

Several well known Welsh poets spent time at Valle Crucis and one, Guto'r Glyn, spent his last years at the abbey and was buried here in 1493. During the late 15th century part of the east range dormitory was converted to create a small suite of rooms for the abbot, and the dormitory itself made into guest accommodation.

The abbot's rooms are some of the most interesting chambers in the abbey today, featuring a nicely carved fireplace. The dormitory now houses a display of medieval sculptured grave slabs.

The end came in 1537 when Valle Crucis was dissolved by Henry VIII. Henry leased the site to Sir William Puckering, and the east range was used as a private dwelling. After Elizabeth I granted the lease to Baron Wotton in 1583 the monastic buildings were converted to serve as a manor house, but in the late 18th century they were once more converted to use as a farmhouse. 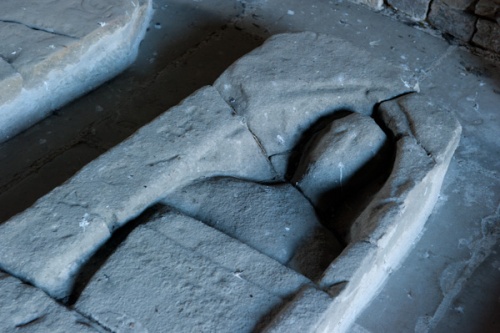 Much of the abbey church is in ruins, but the wonderful west front is well-preserved, with its striking rose window. The west wall was stabilised and restored by George Gilbert Scott in the 19th century. The east range with its dormitory and later abbot's rooms is largely intact, but the west range is fragmentary, as are the kitchens and southern frater range.

Behind the buildings is a beautiful fishpond; the only surviving monastic fishpond in Wales. This is not in its original state, being remodelled as a reflecting pool in the 18th century.

The view of the monastic buildings reflected in the pool is probably the most iconic image of Valle Crucis and has appeared in innumerable guidebooks and calendars over the years.

There is a charge for entry (free for Cadw members) but there is free entry to the grounds in winter.

I've been fortunate enough to visit Valle Crucis on three occasions, and each time I've come away impressed. This truly is an extremely beautiful location, and the abbey ruins seem to exude a sense of peace and calm.

The abbey is easy to reach from Llangollen; just follow the brown tourist signs from the north side of the bridge across the Dee. There is a small parking area, rather incongruously located beside a holiday park, but at least a screen of trees blocks the worst of the noise from the park and does not distract too terribly from the enjoyment of visiting the abbey!

If you have time, do stroll up the road to the 9th-century cross known as Eliseg's Pillar. I say stroll because there's no easy place to park for the Pillar. The cross is in a farm field which can be muddy when the weather is wet, so good footwear is a definite must! 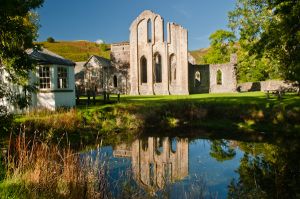 Self Catering near Llangollen