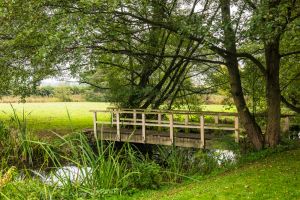 Hen Gwrt is a moated enclosure, probably the site of a manor owned by the Bishops of Llandaff during the 13th and 14th centuries and later by the Herbert family of Raglan Castle. The name reveals its history; 'hen gwrt' translates as 'old court', though nothing of the 'court' remains to be seen.

The site is composed of a large level area, roughly 39 metres by 45 metres, surrounded by a wide moat, making the total size of the site an impressive 72 metres by 76 metres. Excavations at Hen Gwrt revealed that the first building here was established in the 13th century, and the moat was only added in the 14th century.

The site was abandoned in the 15th century but reoccupied in the 16th century when the earlier buildings were partially restored and adapted to form a hunting lodge by the Herberts.

The site was finally abandoned for good in the 17th century after Raglan Castle was slighted in the Civil War and the Herbert fortunes diminished. It is possible that the Hen Gwrt site was destroyed by Herbert enemies during the conflict. Only the moat remains today, and almost all traces of the medieval and later buildings have been lost.

An old story says that David Gam, who died at the Battle of Agincourt in 1415, lived at Hen Gwrt. This is probably untrue, but it does seem that his son-in-law William ap Thomas of Raglan Castle, or his son William Herbert, built a deer park here. The moated site stood in the south-west corner of the deer park. 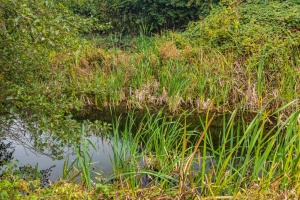 Hen Gwrt is not the easiest place to find; the official CADW description is misleading, and I actually drove past the site without realising it. The moated site is in the angle formed by the B4233 and the minor road leading north to White Castle, just north of Llantilio Crossenny village.

There is no signpost on the B4233. You have to turn up the lane signposted to White Castle, and you will almost immediately see a sign on your right, beside a gate into the site. There is no parking, and no other signs that I could see, so it is a mystery how CADW expect visitors to find and enjoy the site.

There is also, sad to say, no interpretive panel to explain the site layout, its history, or how people lived here. It would really help if there was at the very least an artist's impression of what the moated site looked like when it was used.

As it is, there is a simple footbridge across the south-west corner of the moat, which gives access to the interior of the site. There are no obvious remains of any buildings above ground, simply a large, almost square patch of open ground surrounded by a wide moat.

Having said that, the width of the moat impressed me. Even though it is somewhat choked by bullrushes and encroaching trees in places, the sheer size of the ditch is quite impressive. I imagine that whoever dwelt within the moat must have felt fairly secure.

The location is lovely, with views over farm fields and only the sound of birds to disturb the stillness. Though the official CADW information suggests the site is open 10-4 as of this writing, it looked to me like the gate was left unlocked, so you could visit at any time. 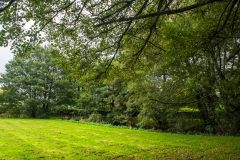 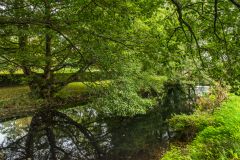 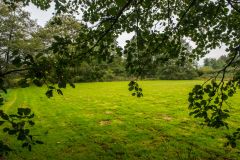 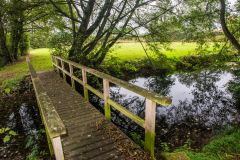