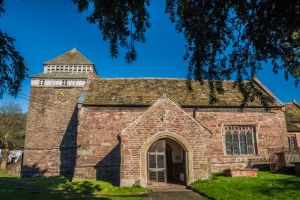 St Bridget's Church in Skenfrith is a 13th century church with a squat tower and a huge buttress. The interior has a Jacobean pew, 15th century embroidery, and the tomb of the last governor of the Three Castles (Grosmont, Skenfrith, and White).
History
St Bridgets stands in a wonderfully atmospheric location beside the ruins of Skenfrith Castle. The church was built in 1207 of red sandstone, extended in the late Middle Ages, and once more in the 17th century. There is a striking west tower with a belfry of timber.

St Bridgets is one of the oldest churches in Monmouthshire in continuous use. Interior furnishings include the partial remains of a medieval chancel screen, and sections of medieval wall paintings. The oldest wall painting dates to the 15th century and depicts Christ of the Trades. Opposite the door is a cartouche with decorative scrollwork, and near the organ are fragments of a 17th century Lord's Prayer. There are also finely carved 16th century box pews, the oldest dated to 1564.

The Morgan Tomb
The most interesting memorial in the church is to John Morgan (d. 1557), the last Governor of the Three Castles and Steward of the Duchy of Lancaster. The Morgan chest tomb depicts effigies of John and his wife Anna, who died in 1564. The sides of the tomb are beautifully carved with figures of four kneeling men, probably the couple's four sons. There are four unknown female figures on the opposite side and heraldic coats of arms on the end panels. The quality of the relief carving is excellent, and the depiction of 16th century costume is wonderfully detailed.

The stone altar is original. It was hidden under the church floor during the Reformation to save it from being destroyed by iconoclasts.

The Skenfrith Cope
The great treasure of St Bridgets is the Skenfrith Cope, a mantle, or cloak, which probably dates to the late 14th century. The cope is made of red velvet, with the embroidered image of the Virgin Mary in the centre. Silver and gold thread was used throughout, and though the thread is quite worn in places it is easy to see what a magnificent piece of needlework it must have been when first made. The cope was discovered in 1848 being used as an altar cloth. It is now in a special display case for visitors to examine. 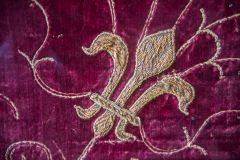 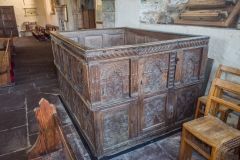 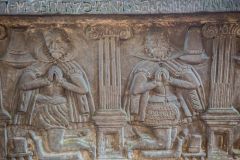 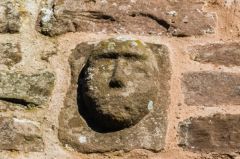