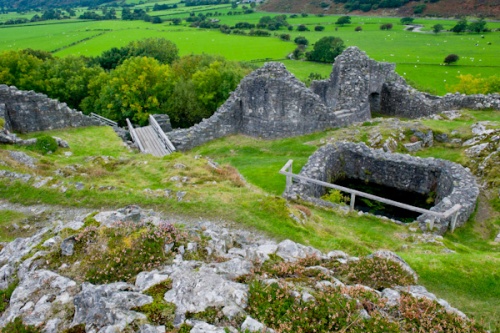 Dramatically sited below Cader Idris, the triangular fortress of Castle-y-Bere rises above the Dysynni valley. The castle was built by Llewelyn the Great in 1221 and fell to Edward I in 1283. Typical of Llewelyn, the castle has twin D-shaped towers. The atmosphere of the ruins is terrific, and the scenery alone makes Castell-y-Bere well worth a visit. The castle site affords fantastic views east towards Cader Idris and west down the valley towards the coast at Tywyn.

When Llewelyn ap Gruffudd died in 1282 his brother Dafydd used Castell-y-Bere as a power base before moving to Dolbadarn further north. In the following year, Edward I easily took Castell-y-Bere when the Welsh commander offered no resistance to the English advance. He was well paid for his surrender, to the tune of 80 pounds, a considerable sum in those days.

Edward ordered Castell-y-Bere to be strengthened, but in 1294 it was burned by Madog ap Llewelyn and the English abandoned the castle.

There is some evidence of settlement at the west end of the site, but it is not clear whether this was the result of the Welsh or English occupation.

The rocky hill upon which the castle is built rises up dramatically from the valley floor and is so covered in trees that in summer it is difficult to see that a castle sits atop the hill. A footpath leads from the small car park at the eastern edge of the hill, around the base of the hill to the west side, where it climbs to the castle approach. 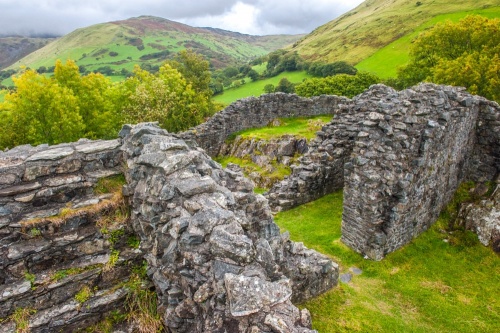 Inside the castle ruins

You enter the site through the outer gate, across a deep ravine by way of a rising stair, and through an inner gate. To the left of the gate is a round tower and directly ahead is a large well, or cistern. Stairs rise to a rectangular keep, and across a courtyard to a south tower, which was probably intended as the final refuge of the defenders if the outer defences were overcome. At the north of the site are the foundations of a chapel tower.

Just a short distance up the road is the hamlet of Llanfihangel-y-pennant, a popular destination for walkers as it offers good access to the footpaths around Cader Idris. The historic church at Llanfihangel-y-pennant is worth a visit, as is the site of the house where Mary Jones, the young girl who helped inspire the Bible Society, once lived.

N.B. You'll see the name of this castle spelled in numerous way, from the Welsh Castell-y-Bere, to the more Anglicised Castle-y-Bere, to unhyphenated versions of both.

Castell-y-Bere is one of the most romantically situated castles I've seen in Britain. The location is absolutely magical. If you can come in the late evening, as the sun is going down, you'll be rewarded by the superb scenery and the sense of isolation that makes this a must-see historic attraction. The ruins are not as imposing as Harlech or Caernarfon, but Castell-y-Bere possesses a location that is unmatched. Wonderful! 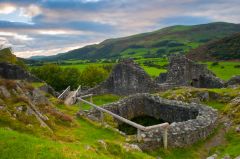 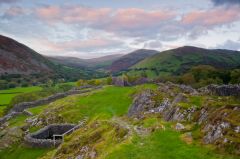 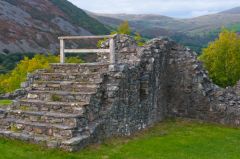 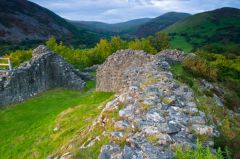 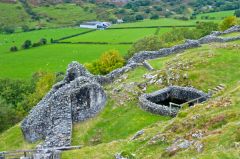 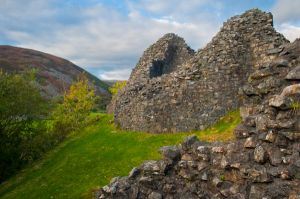 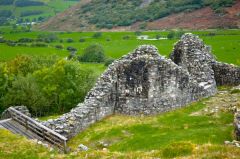 More self catering near Castell-y-Bere >>

More bed and breakfasts near Castell-y-Bere >>