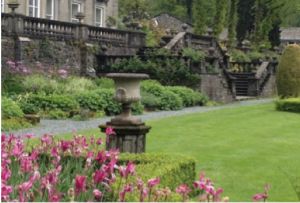 Wern Manor (Y Wern) is a country house between Criccieth and Pwllhelii, remodelled for a successful mining engineer named RM Greaves in 1892. Greaves called upon architect John Douglas of Chester to create a country house in baronial style.

Morris Johns began the Wern estate in the 16th century. Johns laid out the first garden and an orchard. The house then passed to the powerful Wynn family, but in the late 18th century they left it in favour of other houses. It was sold to a Colonel Wardle in 1800, and he began rebuilding the earlier house before running into financial difficulty and fleeing the country. The estate was sold to Joseph Huddart in 1811 and he finished the house begun by Wardle. The property was rented to the Greaves family, then in 1886 Richard Greaves purchased the house and had it rebuilt.

The manor served as a hospital during both World Wars, and for many years as a nursing home before it was converted into holiday lettings for large groups.

The gardens surrounding the house were created in the late 19th century and continually developed into the early 20th century. They are one of the few Welsh gardens at least partly designed by Thomas Mawson. Garden features include terraces, an informal water garden, and a circular garden punctuated by a pavilion. There is also a formal pool. The gardens are set beside 18th century parkland that contains the ruins of a summerhouse.

On the eastern side of the garden is a ha-ha, allowing unbroken views over the parkland towards the distant hills. On the western edge of the park is a small lake that serves as a reservoir. The gardens are laid out east and south of the house and comprise 2 main areas.

To the south is a large area of wilderness garden, dotted with specimen trees and numerous rhododendrons. A stream separates the wilderness from the east garden, an area of wide lawns and formal plantings. The main garden feature is a long avenue leading to the round garden and a stone pavilion designed by Mawson, who laid out the formal garden areas between 1901-1903.

Since the manor became holiday accommodation it isn't regularly open to visitors, but of course you can stay at the manor and still enjoy the gardens! Also, a public footpath leads directly past the house, linking the A497 with Penmorfa to the north. 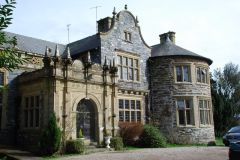 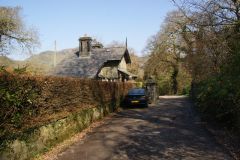 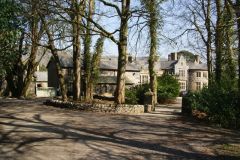