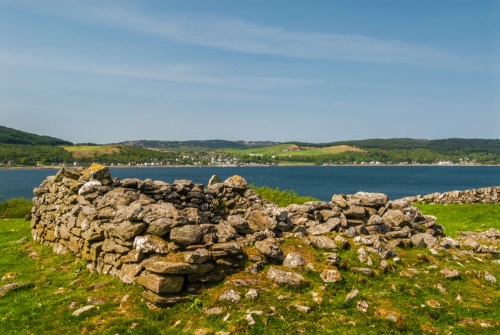 Kilmichael Chapel and the Kyle of Bute

Kilmichael Chapel (or simply St Michael's Chapel) is an early Christian site on the northwestern tip of Bute, north of Glecknabae. This ruined chapel stands on an open hillside with views across the Kyles of Bute to Tighnabruaich and Kames on the opposite shore. A burial ground stands outside the chapel ruins.

How Old is the Chapel?

The roofless chapel is of uncertain date, but it very probably dates to the period between the 5th and 7th centuries. The chapel stands within a roughly circular stone-walled enclosure, a common feature of early Celtic Christian sites.

The walls are of locally quarried schist. bonded by clay. 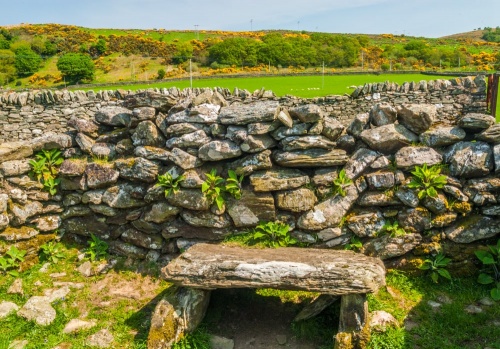 Kilmichael Chapel is laid out on an East/West axis, with internal measurements of 5.7m x 3.8m (18.5 x 12.5 feet). The stone walls stand top a height of 2m (6.5 feet) in places and up to 1.8m (6 feet) wide. There is a very obvious doorway opening in the north wall and a rough stone slab at the east end that may have served as an altar.

The west gable is thought to have been curved, suggesting that the roof was corbeled in a beehive style. This suggestion might not be correct, however, as there are several thick stone slates within the chapel, with holes for pins. This suggests there was a tiled roof.

The likely explanation is that the early Christian chapel was re-roofed following the Reformation, but there is no record of worship here at that time. Another possibility is that the chapel may have been re-used as a mortuary house. 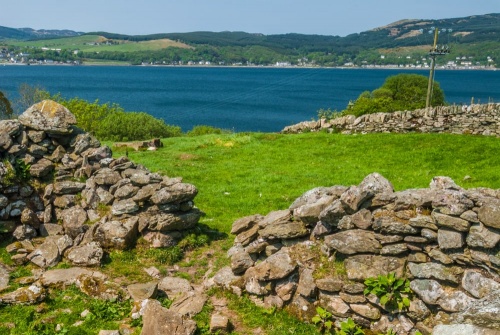 The chapel stands in a burial ground encircled by a stone wall measuring 25m x 22.5m (84 x 74 feet) in diameter. The burial ground is no longer in use, with the last burial here taking place in 1927. There is a cist burial on the south side of the graveyard.

Near the north doorway opening is a low mound of stones, thought to mark the site of a tinker's grave.

One archaeologist has suggested that the chapel was not originally dedicated to St Michael, but to St Maccaile, or Maughold, a disciple of St Patrick who died around AD 488. Maccaile was an Irish prince who became an outlaw and was converted to Christianity by St Patrick. He is the patron saint of the Isle of Man.

A short distance away to the south is St Michael's Grave, a Neolithic chambered cairn. 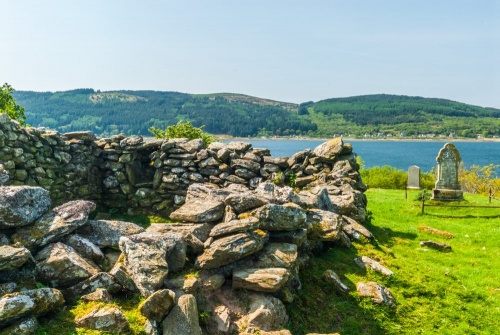 The only access to both St Michael's Grave and Kilmichael Chapel is on foot. Follow the coastal road north from Ettrick Bay to a parking area at Glecknabae, then walk north, following the road to Kilmichael.

When we visited, there was a farm gate at the end of the road, and we could see the chambered cairn directly ahead on top of a rise. There were no signs, but also no signs saying to keep out, so we simply opened the gate and made sure it was shut firmly behind us.

Head for St Michael's Grave, and when you reach the top of the rise you will see the ruins of Kilmchael Chapel ahead of you, further down the slope. 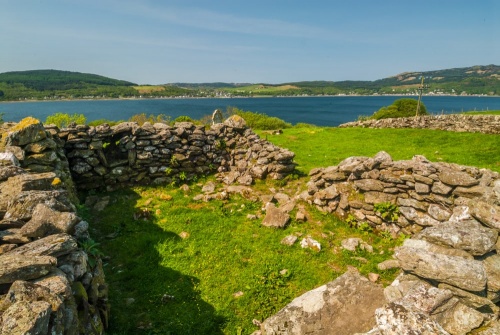 Looking northwest to the Kyle of Bute

From the parking area at Glecknabae to the chapel is approximately 3.5km (2 miles) and the going is very easy. Do take the time for a detour on the way to visit the Cairnbaan Chambered Cairn in the South Wood of Lenihuline, about 1km south of the chapel.

A certain very popular travel website incorrectly gives the name St Michael's Chapel to the ruined church of St Colmac at Upper Ettrick Farm, near the junction of the B875 and the A844, a few miles west of Rothesay. That is NOT the same site!

Nearby accommodation is calculated 'as the crow flies' from Kilmichael Chapel. 'Nearest' may involve a long drive up and down glens or, if you are near the coast, may include a ferry ride! Please check the property map to make sure the location is right for you.