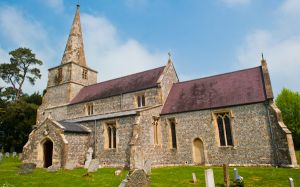 The lovely country church of St Michael's, Little Bedwyn, stands at the end of a row of pretty cottages, on the north bank of the Kennet and Avon Canal. The location is idyllic, and it seems far from the bustle of daily life. Highlights of the interior include a set of humorous carved heads adorning the nave pillars, and lovely Romanesque architecture throughout.

This lovely Grade I listed building may date to the Saxon period, but most of the current building is 12th century and later. It is built of flint and rubble, with a slate roof, with a nave, chancel, south porch, and a four-stage west tower rising to a conical steeple, with the later addition of a 19th-century vestry.

Most of the windows are 15th century, in Perpendicular style. The three-bay nave is 13th century. Its tall and relatively narrow plan has suggested to historians that it may have been adapted from an earlier Saxon nave.

It is in the nave that you will find most of the historic interest for the column capitals have been beautifully carved, each with a relatively unique design. Here you will see traditional Romanesque designs, including fanciful ball-flower decoration and scalloped fluting. The most interesting capital has several amusing heads projecting outwards, including one of a poor chap with a grotesque set of buck-teeth.

On the west wall, near the door, is an original medieval iron cross that once adorned the steeple. Putting an iron cross on the highest point of a building proved to be an unwise move, as it was inevitably struck by lightning. Luckily the cross was not badly damaged but it has been moved inside the church for safety's sake.

St Michael's is a quiet place, a simple country church in a beautiful location. A few miles down the road is Great Bedwyn, where the church of St Mary's is one of the finest parish churches in Wiltshire. 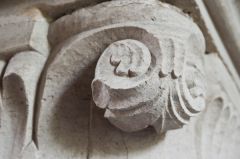 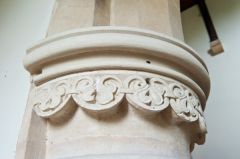 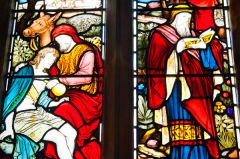 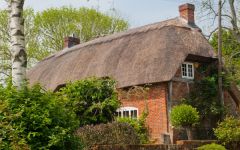