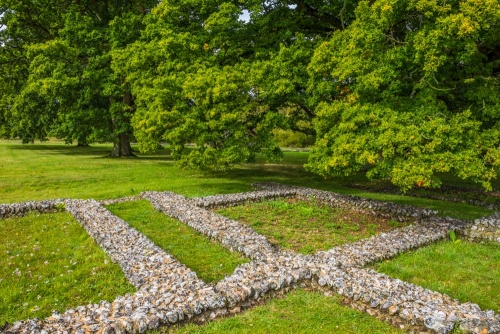 In the grounds of the Elizabethan mansion of Littlecote House near the Berkshire town of Hungerford stands perhaps the best-preserved Roman villa above ground in England. Littlecote Roman Villa is the only fully exposed villa in Britain and features the largest gatehouse ever found in a Roman villa in Britain.

The most memorable Roman remain, however, is a stunning 4th-century mosaic depicting Orpheus, the god of the underworld, arguably the finest Roman mosaic yet discovered in the British Isles.

The villa appears to have been built in the 1st century AD, during the first wave of Roman settlement in Britain. It seems to have been only sporadically occupied after that. The villa stands on the south bank of the River Kennett. 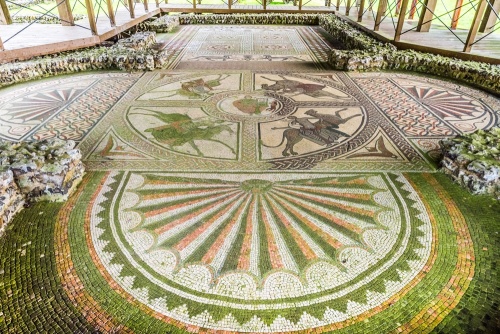 The first structure built here was a British round-house erected around 60 AD. Around 120 AD a combined bakery and brewery were built. Like the round-house, the brewery and bakery were built of timber. Around 250 AD the first stone building was erected. This building was altered around 290 AD with a workers' bath in the north corner.

The final and most interesting phase of construction came around 360 AD when the earlier building was largely demolished. The east, north and west walls were kept intact to form part of a new building that may have been a 'telesterion', a sacred precinct dedicated to the cult of Orpheus and Bacchus.

The sacred site included an entrance hall with a double door to a paved courtyard. At the far end of the courtyard is a door giving access to an antechamber with a bath suite to one side and steps on the other leading to a hall with a triple apse - like a three-leaf clover design. This triple apse, or 'triconch', is unique in Britain. The hall was paved with an elaborate mosaic that survives to a remarkable degree. 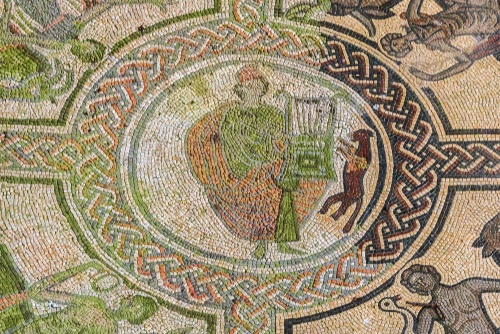 The central figure of Orpheus

The mosaic was first mentioned in 1727 by William George, the estate steward for Sir Francis Popham, the owner of the Littlecote estate. The mosaic was discovered when digging post holes for a new fence around a hunting lodge. The mosaic was recorded by the Society of Antiquaries in April 1728. The antiquarian Roger Gale called it 'the finest pavement that the sun ever shone upon England'.

The sun didn't shine on it for long, though, as Sir Francis Popham had it reburied. He seems to have deliberately obscured its location, perhaps to avoid having antiquarians invading his grounds to view it. The mosaic was thought destroyed until it was rediscovered in 1977. Half the tiles had survived, and were replaced with modern terracotta tiles modelled on a 1730 engraving by George Vertue in the library of the Ashmolean Museum in Oxford.

The mosaic is centred on a figure of Orpheus, the musician and priest of Apollo the sun god surrounded by a larger circle divided into quadrants. Within each quadrant is a female deity, each representing one of the four seasons. Here you see Persephone (Kora) with a goat, Venus (Aphrodite) with a hind, Leda (Nemesis) with a panther, and Demeter with a bull. 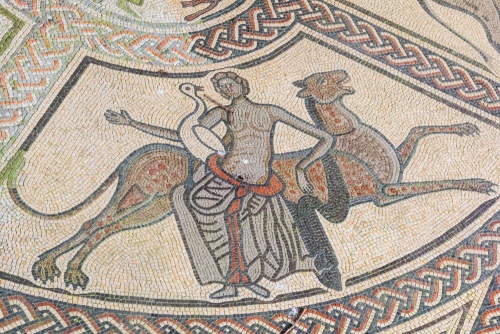 Leda (Nemesis) with a panther

The beasts in each scene have been interpreted as transformations of Bacchus (Zagreus), the son of Zeus, when fleeing from the Titans. The entire sequence relates not only to the seasons but to the cycle of birth, death, and rebirth.

The mosaic has been the subject of scholarly debate. Some scholars believe that it was simply made to decorate a summer dining room. The prevailing opinion, however, is that the mosaic and the hall in which it stands were part of a re-purposing of the Littlecote site from a villa to a ceremonial complex.

This complex is thought to have been a collegium, a form of pagan monastery for followers of a sect based on the cult of Bacchus and the legends of Orpheus. Bacchus was considered to be a saviour deity who promised eternal life to his followers. 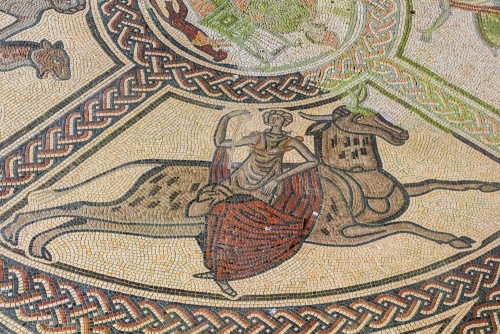 Demeter with a bull

But why was the Littlecote villa transformed from a farm complex to a sacred site? One possibility is that the transformation occurred during the reign of the pagan emperor Julian the Apostate (reigned 361-363 AD), who rejected Christianity and tried to return the Roman Empire to the 'old religions'. During and after Julian's brief reign pagan temples and shrines in Britain were restored and new ones built. That may be what happened here at Littlecote.

There's a lot to see in addition to the remarkable Orpheus mosaic. At the site entrance is the East Range with its impressively large gatehouse and a stable building. The gatehouse is huge, with triple arches supporting flanking towers.

The South Range began as an early 3rd-century farm building but was transformed around 270 AD with a bath complex at one end.

The West Range includes the remains of a well, overlaid by a later wall, and a well-preserved hypocaust, or underfloor heating system. Near the south-west corner of the range is a small building that may have ben a smokehouse for curing meat. 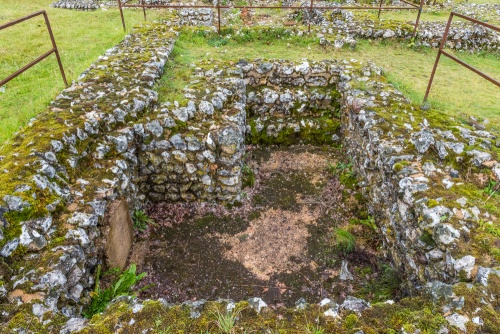 Finds from the Roman villa are on display inside Littlecote House, now a country house hotel. The house was built by Sir George Darrell on the site of an earlier 13th-century mansion. Henry VIII is said to have visited Littlecote House during his courtship of Jane Seymour, his third wife. Sir John Popham inherited Littlecote in 1589 and built the present Elizabethan mansion. Three monarchs stayed at Littlecote House; James I, his grandson Charles II, and William III.

Visitors are welcome to explore the restored formal gardens and view the villa exhibit inside the house. You can also buy a guidebook giving more details about the villa and its history. 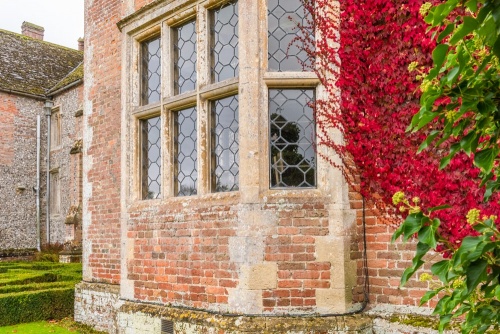 Littlecote House is located on a country lane two miles west of Hungerford, off the B4192. As you enter the estate grounds you will see signs guided you to parking for visitors to the villa. From the parking area it is a short walk west over level ground to the villa. There are information panels for each of the villa ranges, and another for the Orpheus mosaic, which is protected by a modern building to offer some shelter from the elements. There is no admittance fee. 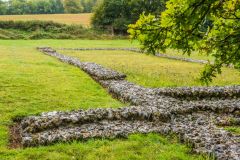 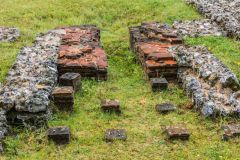 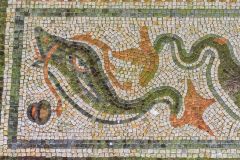 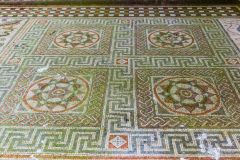 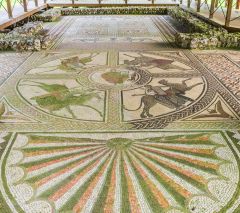 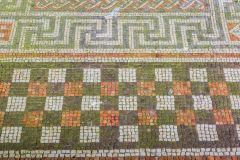 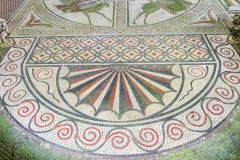 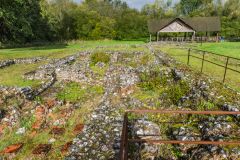 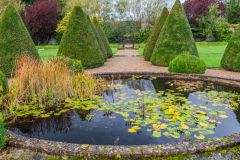 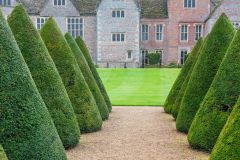