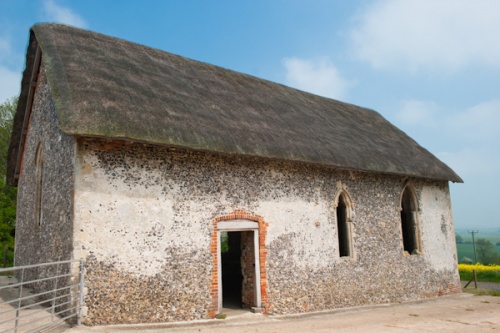 Chisbury Chapel is a small late 13th-century chapel made of flint walls and topped with a thatched roof. It was built by the lord of Chisbury Manor as a chapel of ease so that local villagers and the manor household would not have to travel to Great Bedwyn parish church.

A chapel of ease was more than a convenient place to pray; it was a statement of wealth and prestige by the lord of the manor. An alternative theory is that it was a free chapel supported by the Abbey of St Denys, in Hampshire.

The Reformation spelled the end for chapels like Chisbury, and it ceased functioning as a religious building in 1547. It was then used as a barn for Chisbury Farm.

The chapel, which is dedicated to St Martin, is rectangular and measures approximately 18 metres long by 8 metres wide. Set into the flint walls are 6 geometrical windows supported by stone quoins.

Within the chapel, you can see the remains of a consecration cross, which was painted on the walls of a church during the official ceremony creating a religious status for the building. The chapel is composed of a nave and chancel, and there are traces of the rood screen that would originally have divided the two.

The chapel is built on the edge of the earthworks of the Iron Age hillfort of Chisbury Camp. There is evidence that the Camp was occupied well into the Romano-British period. In truth, the earthworks are quite difficult to make out on the ground. I asked a local farmer if there was anything of the Camp to see and she grimaced and said, 'No, there's just the chapel'.

There was no apparent signage to the chapel from the road through Chisbury village, but there is a brown English Heritage sign at the bottom of the drive to Manor Farm. Though the sign indicates a walk to the chapel, you can actually drive up the track to a wide parking area outside the chapel.

The chapel is completely open, meaning the local birds love it; and there is considerable evidence of their presence on the earthen floor within the chapel. If the weather is wet you will definitely want good mud-proof footwear

It won't take long to visit the Chapel, as there is very little to see inside, just the faded consecration cross and the timber roof, plus the rather worn medieval window frames with bits of the original carved moulding in place. The main interest at Chisbury is the 'type' of building it is - a simple country chapel of a sort that must have existed in isolated countryside areas throughout the Middle Ages. 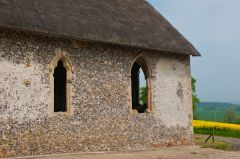 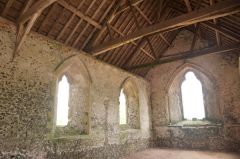 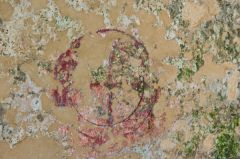 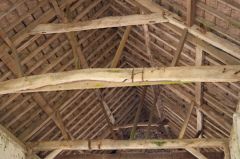 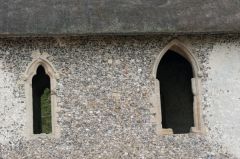 More self catering near Chisbury Chapel >>