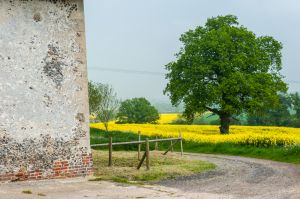 Chisbury Camp from the medieval chapel
Chisbury Camp is an Iron Age hillfort which was later occupied during the Roman period. The hillfort is 14 acres in size, with two, or, in some places, three sets of banks and ditch defences. Iron Age beads were found in the centre of the site, near later Roman pottery.

Finds from the site are on display at Devizes Museum. Other finds, including a spear-head and two swords found in 1900, have been lost.

On the edge of the earthwork is Chisbury Chapel, a small 13th-century thatched chapel dedicated to St Martin, now in the care of English Heritage.

More self catering near Chisbury Camp >>