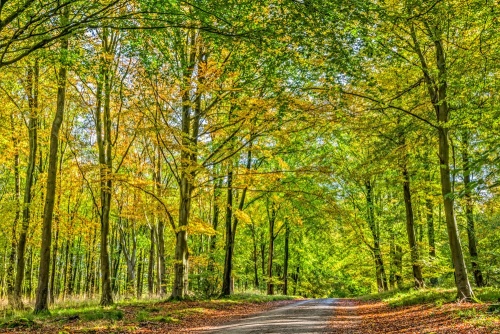 Savernake Forest is the only privately owned forest in England and is among the oldest woodland areas in the country. The forest stretches south from the historic market town of Marlborough, covering some 4500 acres (1821 hectares).

Wide avenues run through the forest, connected by wandering trails. Here you will find magnificent ancient oak trees over 1,000 years old, sharing space with thickets of bracken and thorns, with open glades where deer roam.

Savernake Forest is more than 1,000 years old. The first written record comes in a charter of King Athelstan in AD 934 which refers to 'Safernoc'. That makes it several centuries older than the New Forest, planted by the Normans.

The origin of the name Savernake is unclear, though it may come from the same root as the River Severn. Alternatively, it may come from Saxon words for 'sweet fern'. The 'oc' or 'ake' ending probably refers to oak trees, which make up a large proportion of the woodlands. There are several prehistoric sites within the woodland including burial mounds and earthworks. A Roman road runs through the forest, roughly parallel to the Grand Avenue, and a type of pottery known as Savernake Ware was produced here from the 1st to the 3rd century.

Though the forest is owned by the Earl of Cardigan, it is maintained by Forestry England. Most of the forest is open to the public, and miles of trails criss-cross the woodland, making it a wonderful area for walks among some of the oldest trees in Britain.

Savernake was claimed by the Crown as a royal hunting forest shortly after the Norman Conquest. Monarchs hunting in the forest stayed at Marlborough Castle (now vanished). To administer the royal forest the early Norman kings appointed a warden, a hereditary post awarded to the Esturmy family up to 1427.

From them, it passed to the Seymour family and finally to the Ailesbury family (from 1627). The symbol of the Warden of Savernake Forest was an ivory hunting horn decorated with bands of silver. Henry VIII was an avid sportsman, and in his younger days he enjoyed a reputation as an active and athletic monarch. He is known to have hunted in Savernake Forest several times, staying when he did at Wulfhall (Wolf Hall or Wolfhall) near Burbage, the home of Sir John Seymour, the Warden of Savernake Forest.

On one of those visits he met and fell in love with Jane Seymour, his host's daughter. Jane became Henry's third wife after the execution of Anne Boleyn. She bore him a son, the future Edward VI, but tragically died shortly after. She is buried in Henry's tomb at St George's Chapel, Windsor Castle.

Considering how long Savernake Forest has stood perhaps it should not be a surprise that there are several ghost stories revolving around it. The most common ghost story involves a headless horsewoman astride a huge white steed.

The spectre is said to be the spirit of a woman who died in a tragic hunting accident when her horse was startled and bolted. The horse ran under a low-hanging forked branch which took the unfortunate rider's head clean off. The headless rider gallops along Grand Avenue at a great speed, and the sound of thunderous hoofbeats fill the air.

A later twist to the story suggests that the ghost is that of Jane Seymour, but since Seymour died of complications in childbirth rather than by being beheaded, the connection seems tenuous at best. 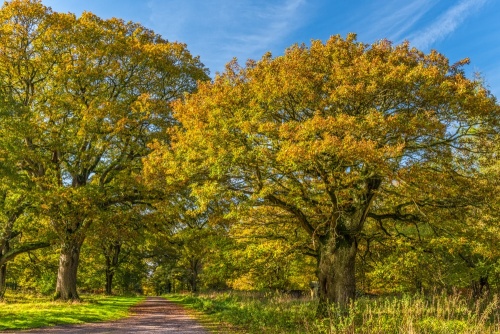 Wild boar were once common in the forest but died out after the reign of Elizabeth I. Charles I reintroduced boars, but they spread so quickly to neighbouring forests that they became a nuisance and they were killed off during the Civil War.

The Trees of Savernake

Savernake Forest is a mix of oak, beech and birch trees. The beech trees were planted by Charles, Lord Bruce and his nephew Thomas Bruce. The Royal Navy used oak from Savernake for its ships, and timber from the forest was also used for repairs to Marlborough Castle.

Despite the depredations of the navy, some of Savernake's ancient oaks survive. Many of these giant trees are labelled, among them the original Queen Oak, said to have been planted to celebrate the wedding of Jane Seymour to Henry VIII in 1536.

The forest was transformed in the middle of the 18th century by Thomas Brudenell-Bruce, 1st Earl of Ailesbury (later spelled Aylesbury), who lived at Tottenham House, just outside the southern boundary of the present forest. The Marquis called in Lancelot 'Capability' Brown to transform his hereditary wardship into a landscaped park, with broad avenues and rides.

The centrepiece of Capability Brown's transformation of Savernake Forest was the Grand Avenue, which stretches north-west to south-east from the outskirts of Marlborough almost to the front door of Tottenham House. The Grand Avenue is lined with beech trees and stretches 4.2 miles (some sources say 3.9 miles) dead straight from end to end, making it the longest avenue in Britain according to the Guinness Book of World Records.

The Grand Avenue connects with seven other forest rides at Eight Walks, which acts as a hub linking major routes through the woodland. A local tradition says that a gibbet once stood at Eight Walks. Not the most impressive 'named' tree in the forest, but by far the easiest to find, this tree stands on the north side of the road to the parking area, opposite the information panel. At the junction of the White Road and Grey Ride, this imposing oak has a girth of almost 7m (roughly 23 feet). The pair of 'Saddle Oaks' are so-named for their huge horizontal branches. 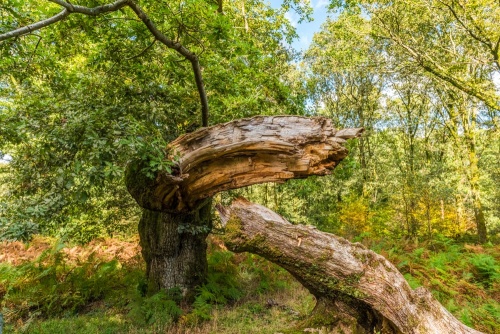 On the northern edge of the forest stands this magnificent ancient oak, thought to be about 1,000 years old. This young oak is a replacement for the ancient King Oak. This growing tree replaces the original Queen Oak, planted to commemorate the marriage of Jane Seymour to Henry VIII in 1536. Seymour was the daughter of Sir Thomas Seymour, the hereditary Warden of Savernake Forest. This giant oak is probably the oldest tree in Savernake Forest and is thought to be over 1,100 years old. It is difficult to find, yet is seen by more people than any other tree in the forest since it stands directly beside the busy A346 road between Marlborough and Burbage.

The Big Belly Oak (sometimes known as the Big-Bellied Oak) measures almost 11m (33 feet) around the base, which is supported by an iron band. You can walk inside the tree's hollow centre. These are just some of the 'named' trees in Savernake Forest. We hope to photograph more on our next visit, including the wonderfully named 'King of Limbs' tree.

Savernake Forest can be reached by footpaths from the south-eastern edge of Marlborough. If you come by car there is a free parking area at Postern Hill (postcode SN8 4ND), just off the A346 at the north-western corner of the forest. There are toilets and an information panel with a map of the forest, but no other visitor facilities.

You can also access the forest from the A4, immediately east of Marlborough. There is a turning just east of the hospital at Forest Hill, which takes you onto the Grand Avenue. You can find plenty of places to pull off onto the verge o the Grand Avenue.

The only real negative about visiting Savernake Forest is that there are no signposts anywhere. You might realistically expect some colour-coded circular walks of different lengths linking the most interesting trees, but no, there are no signs whatsoever. That does make it rather easy to get lost if you don't know the forest.

We highly recommend taking along Ordnance Survey Explorer 157 map, covering Marlborough and Savernake Forest. You can also photograph the information panel and map at the Postern Hill parking area so you can refer to it on your walk. The Forestry Commission also has a very handy suggested circular route linking some of the major trees, and we printed this map and took it with us.

Savernake Forest is at its colourful best in late autumn when the oaks and beech trees turn the woodland into a riot of rich gold, orange, yellow and red colours. More self catering near Savernake Forest