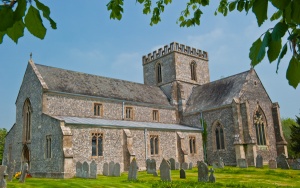 Great Bedwyn village lies in glorious Wiltshire countryside between Hungerford and Marlborough. The origin of the village name is uncertain, but it may come from a combination of the Celtic words for 'white' and 'grave', and refer to an ancient barrow mound. A mound was indicated to the north-east of the village on a map made the antiquarian William Stukeley in 1723, but no evidence of the barrow now exists.

The Saxon ruler Cissa made his headquarters here, and in AD 675 a battle between the armies of Mercia and Wessex was fought at Bedwyn. Great Bedwyn rose to the status of a city under the Saxons, and was held by the crown under Edward the Confessor, and later, by William the Conqueror. Great Bedwyn was a borough and sent two members to Parliament until the Victorian Reform Bill put an end to traditional 'rotten boroughs'.

We know that the first church at Bedwyn dates to at least the early 10th century, for in 905 the Bishop of Winchester purchased land to build a church here. That first church was almost certainly made of wood, and no trace of the Saxon church can be found. The current building may date to 1092, though it has been considerably altered and enlarged since then.

The church was established as a prebend of Old Sarum Cathedral (the original Salisbury Cathedral). When the prebend was eventually dissolved by Henry VIII at the Reformation, the church and estate were granted to the powerful Duke of Somerset, known to history as The Lord Protector. Great Bedwyn stayed in Somerset hands until 1847.

St Mary's is a very large church, built from a mix of freestone and local flint. The chancel is Early English, with early 14th-century transepts and imposing late medieval aisles, clerestory, and tower. 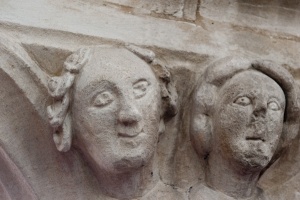 Carved heads in the nave

The nave - the oldest part of the church - has beautifully moulded and carved capitals. One of the capitals has a row of three small carved heads. These are thought to represent the stonemasons responsible for the work - a kind of medieval calling card. On the north of the central arch is a 14th-century painting, which has unfortunately been disfigured, probably by Cromwell's soldiers during the Civil War.

The north transept is entered through a rare 14th-century wooden screen. The screen has had a strange and wandering history. The screen was removed during restoration in 1854, and it lat for a time behind the vicarage. It was moved to the home of the Ailesbury family at Warren, rediscovered in 1919, moved to the Victoria and Albert Museum, where it was on display until 1946, then stored at the church in Wivelscombe, then to a yard at Kingsbury Episcopi, before it was rediscovered and finally returned to Great Bedwyn church in 1974.

On the floor of the transept is a grave slab to Thomas Dogeson, d. 1501.

The south transept is full of historic interest. Set below the large window is a pair of tomb recesses. On the left is a stone effigy of a knight in armour, his feet resting on a hunting dog. The effigy is thought to be that of Sir Adam de Stokke (d. 1313). To the right is a grave slab thought to be that of Adam's son, Sir Roger de Stokke (1333). Sir Roger is probably the man responsible for building the transept.

If the south transept is full of interest, the chancel is a treasure trove. You enter through a screen of wrought iron given by the Marchioness of Ailesbury in 1854. On the north wall is a single lancet with a stained glass design depicting the Tudor rose, Prince of Wales feathers, and the badge of Jane Seymour. This glass was inserted in 1901 by Georgina, wife of the 5th Marquis of Ailesbury.

Near the window is a brass to John Seymour (d. 1510), and another to Lord Beauchamp (d. 1612), the son of the Earl of Hertford and Lady Catherine Grey. Lady Catherine was the sister of Jane Grey, the Nine Day's Queen.

Lord Beauchamp was a direct descendant of Henry VIII's sister, and by the terms of Henry's will, he should have been named king of England in 1603 on the death of Queen Elizabeth I. It is ironic that a man who could have been king is now remembered by a small, insignificant brass plaque. Oh, what might have been! 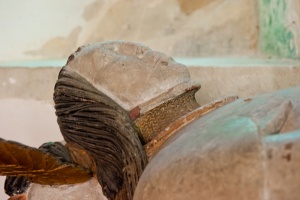 Beside the brasses, against the north wall, are two impressive memorials. The first is a marble monument to Lady Frances Devereux, the widow of the Duke of Somerset (d. 1674).

Much more impressive is the Elizabethan tomb of Sir John Seymour (d. 1590), the father of Queen Jane Seymour, third wife of Henry VIII, and of the Protector, Duke of Somerset. Sir John's effigy shows him in full armour, his head on a helmet and his feet on a lion. The base of the tomb is decorated with heraldic shields.

There are two items of note in the churchyard. The first and most obvious is the tall medieval preaching cross beside the path. The shaft and plinth of the cross are probably original. The second item is little harder to find; on a buttress supporting the south wall of the aisle is an inscription in Greek letters reading

This obscure epigram is thought to be an invocation for Christian warriors to hold their faith.

St Mary's is a marvellous church; one of the most interesting in north Wiltshire, and well worth a visit. 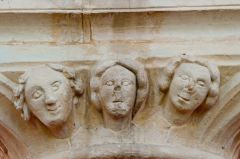 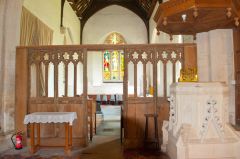 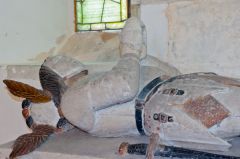 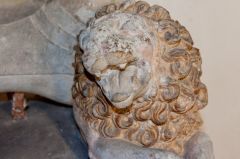 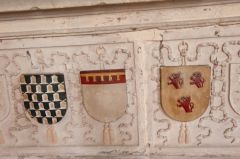 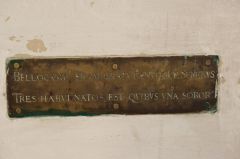 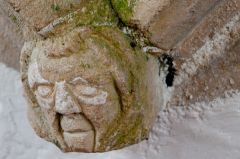 More self catering near Great Bedwyn