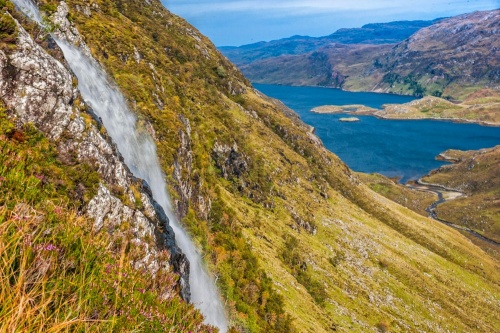 Eas a Chual Aluinn, also known as Eas Coul Aulin, is a spectacular waterfall, the highest falls in Britain at 638 feet. The falls spill from a high plateau overlooking Loch Glencoul and fall 200 metres in two steps to the shore of Loch Glencoul far below. The name is an English mangling of the original Gaelic which translates as 'waterfall of the beautiful tresses'.

Start from the parking area beside the sharp hairpin bend on the A894, at the north end of Loch na Gainmhich, between Lochinver and Kylesku.

The route is not signposted, so you WILL need the OS map and know how to use it (here speaks the sad voice of experience - I forgot my map in the car and got horribly lost, blundered into bogs and frightened the local wildlife dreadfully before I rediscovered the path).

The trickiest part of the trail is the very beginning, where the outflow from the loch rushes through a narrow cleft and spills down in a marvellous waterfall. The trail leads across the outflow on a series of stepping stones, but if the water level is high this traverse can be very dicey. 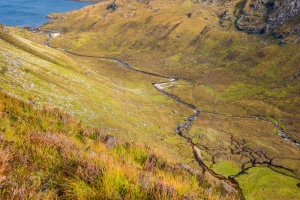 Once across the stepping stones, the trail does NOT proceed straight up the hill, so don't be fooled by what appears to be a path ahead. Rather, the trail bends along the slope of the hill to your right, parallel to the shore. After several hundred metres of very boggy ground, the solid trail appears. From this point, the going is pretty straightforward.

The trail climbs and you pass close to the beautiful little Loch Bealach a' Bhuirich. The scenery is magnificent, with scattered boulders of Lewisian Gneiss looking like a lunar landscape.

The trail runs down the left of the burn to the edge of the plateau where you can hear the sound of the falls.

Though the OS map suggests that the path stays on the left of the burn, in reality, you will need to cross over on stepping stones and follow a faint track along the lip of the plateau until you can turn back under the edge of the plateau to see the upper section of the falls.

Unfortunately, the entire 200-metre drop of the falls is not visible; only the top section can be clearly seen.

If you want to see the entire waterfall, take one of the regular cruises on Loch Glencoul from Kylesku, which depart in good weather from the slipway near the Kylesku Hotel. If the day is clear you can look across the glen to Eas-an-t-Strutha Ghil, a similar but smaller waterfall.

WARNING: Do not attempt to climb directly under the falls, and please don't go right to the edge of the plateau. The fall is almost sheer, and if you slip your next stop will be several hundred feet down.

The walk to Eas a Chual Aluinn is utterly superb. A reasonably fit person should plan on five hours there and back.

Eas a Chual Aluinn appears in our list of 22 Beautiful Scottish Waterfalls. 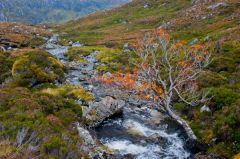 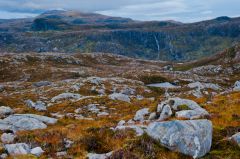 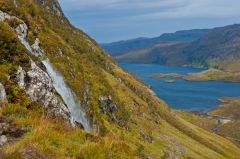 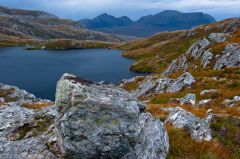 Nearby accommodation is calculated 'as the crow flies' from Eas a Chual Aluinn Waterfall. 'Nearest' may involve a long drive up and down glens or, if you are near the coast, may include a ferry ride! Please check the property map to make sure the location is right for you.

More self catering near Eas a Chual Aluinn Waterfall >>

More bed and breakfasts near Eas a Chual Aluinn Waterfall >>