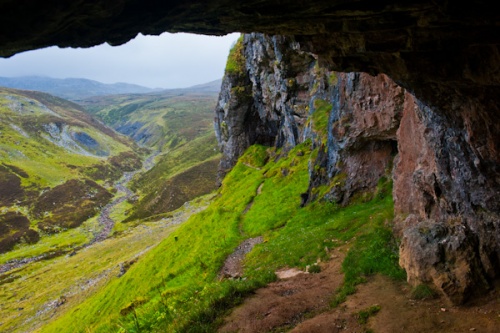 The Bone Caves are a series of natural caves set into a high limestone cliff called Creag nan Uamh (Crag of the Caves). The caves are named for the large numbers of animal bones found during excavations.

There are four main cave openings in the cliffs, formed before the last ice age by water dissolving limestone in cracks in the surrounding rock. Subsequent glacial action and erosion of the glen by water left the caves hundreds of feet above the valley floor.

There is no indication that the caves were ever used as human habitat, but two separate human burials have been discovered within the caves.

HISTORY OF THE FINDS

The first attempt at an excavation of the Bone Caves took place in 1889 under the direction of geologists Ben Peach and John Horne, who found bits of animal bone at one of the cave mouths.

In 1928 the first proper investigation took place under the direction of another geologist, JE Cree. Cree found two pieces of reindeer antler and a bear tooth. The finds encouraged him to return the folllowing year and excavate the two caves we know as Badger and Reindeer Caves. This excavation discovered remains of land snails, frogs, and the jaw bone of a wildcat. 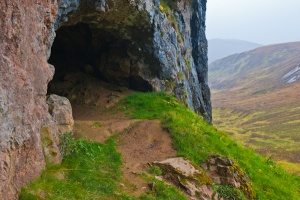 How did they get here? As far as we can tell, the caves were never inhabited by humans. The most likely explanation for the large number of bones inside the caves is that they were washed down into the caves after the glaciers retreated from this area. Some may also have been dragged here by hunting animals.

Then the investigators made an exciting discovery in Reindeer Cave; a human skull, missing its jaw bones, was found in a small stone enclosure. A second set of human bones was discovered in a niche in the rear of the cave wall.

These remains both suggest intentional burials. Radio-carbon dating of the bones, along with a later find of two further human remains, suggests that they were buried here between 2515 and 2720 BC. A small object made from reindeer antler was also found, dating to about 850 years ago, and a small pin made from a walrus tusk dating to about 2,000 years ago.

In total, over 1000 pieces of reindeer antler have been found in the Bone Caves, with dates ranging from 47,000 to 8,300 years ago. The large number of reindeer bone suggests that the area at the head of the glen was used as a calving ground.

One rare find was the skull of a Northern lynx, dated to 1,770 years ago. This is the only Northern lynx ever found in Scotland. Other intriguing remains include a possible polar bear, arctic fox, wolf, and brown bear.

Finds from the caves are kept at the Royal Museum of Scotland in Edinburgh. 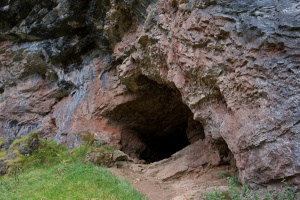 There is a small, signed parking area on the east side of the A837 about 2.5 miles south of Inchnadamph. The nearest postcode is IV27 4HN, but that just gets you to the Inchnadamph Hotel.

Keep travelling south until you come to the second parking area south of Inchnadamph. If you are travelling north, the parking area is on the right-hand side, just over two miles past the Ledmore junction.

There is an information board at the parking area, and a trail leads through a gate, along the north side of the small burn of Allt nan Uamh. You pass a small waterfall near the start of the trail. After about one mile a series of stepping stones crosses the burn (or you could keep on the north side if you want to get a good view of the caves from across the glen).

If you choose to continue on, you can then loop back across the burn higher up the glen for a nice circular walk.

You can clearly see the cliffs ahead, and the cave openings are visible from far away. The trail rises after you cross the burn, and can be slippery in wet weather. It should take no more than 30 minutes to reach the caves, and an equal time to return.

It's a magical place; the location is superb, in a secluded glen seemingly a million miles from anywhere. It does not take terribly long to explore the caves themselves, which are actually quite shallow despite the considerable size of the cave mouth openings but I would rate the Bone Caves as a 'must-see' in Assynt.

The Bone Caves have been named a Site of Special Scientific Interest (SSSI) and are part of the North West Highlands Geo Park. 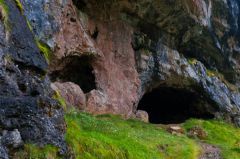 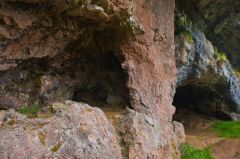 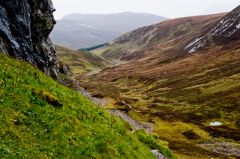 Nearby accommodation is calculated 'as the crow flies' from Bone Caves. 'Nearest' may involve a long drive up and down glens or, if you are near the coast, may include a ferry ride! Please check the property map to make sure the location is right for you.

More self catering near Bone Caves >>