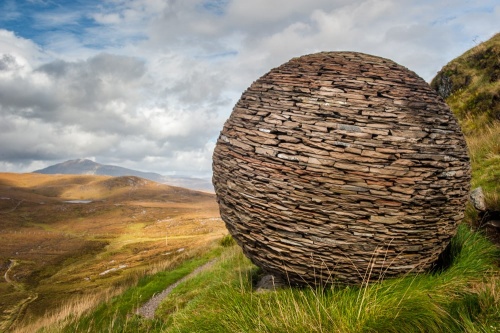 Knockan Crag is a low, rocky hill in Assynt, roughly 13 miles north of Ullapool on the A835, just south of Knockan. The name comes from the Gaelic Creag a' Chnocain, meaning 'crag of the small hill'.

The Crag is famous in the history of the study of geology, for it was here in the Victorian period when geologists first noticed that the upper layers of Moine schist (crystalline metamorphic rocks) at the top of the Crag appeared older than the layers of sedimentary limestone further down. Geologists disagreed over how such an anomaly could have been produced, and their arguments became known as The Highlands Controversy.

One set of scientists, notably Roderick Murchison and Archibald Geikie, believed that the dating was wrong, and that the Moine schist on top must be younger than previously thought. They were proved wrong in 1884 by Ben Peach and John Horne, who mapped the region and demonstrated that the oddity was a result of tectonic plates displacing the schist up to 40 miles and forcing it on top of the younger rocks. The result was that the upper layers of schist are up to 500 million years older than the underlying rock.

Peach and Horne's study of Knockan Crag paved the way to understanding how tectonic plates act, how rocks deep underground are heated, fused, and buckled by the action of pressure. 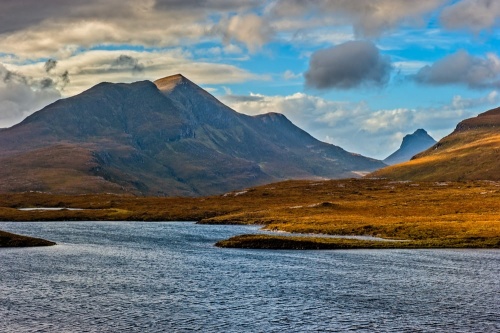 This 'thrust fault' was the very first to be discovered in the world, and the Moine Thrust is famous amongst geologists the world over. A detailed survey was published by Peach and Horne in 1907, with the title The Geological Structure of the Northwest Highlands of Scotland. The study remains a classic in the study of geological tectonics.

A monument to Peach and Hore stands a few miles to the north of Knockan at Inchnadamph.

In light of the region's remarkable geology and its importance in history, Knockan Crag was named as part of the Inverpolly National Nature Reserve in 1962, and became an NNR in its own right in 2004. It is part of the much larger North West Highlands Geopark. 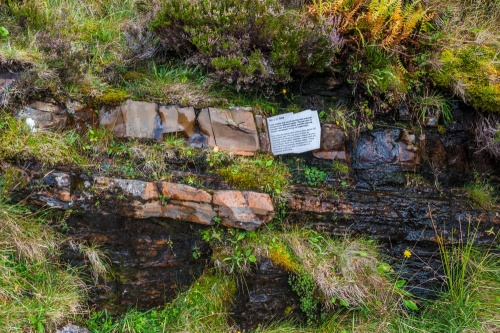 The Knockan Crag NNR features some of the oldest rocks in the world, dating back roughly 3 billion years. The heather and bog landscape obscures an ancient seabed of mud, while the mountain bedrock is sedimentary rock deposited by ancient rivers.

Near the start of the trail is a turf-covered Rock Room visitor centre, where you can learn the story of Knockan and the extraordinary geology of the Moine Thrust. At the Rock Room, you can learn about Peach and Horne and their remarkable discoveries here at Knockan Crag.

Three waymarked trails depart from the visitor centre. The easiest is the Quarry Trail, which takes about 20 minutes and is suitable for all ages and abilities. Then there is the longer Thrust Trail, leading to the spot where Peach and Horne solved the mystery of the Monie Thrust. This takes 30 minutes and is more challenging.

Then there is the Crag Top Trail, which leads to the top of the Crag and back along the crest, with two viewpoints offering superb views over Assynt. This is more strenuous and will take roughly 1 hour to complete. 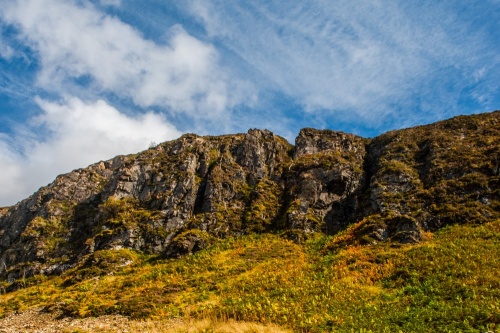 The trails are dotted with interpretation panels to help visitors understand the geology of Knockan Crag. There are well-placed benches to sit and enjoy the views.

The trail skirts exposed sections of the Moine Thrust, and in one spot you can put your hands on both sides of the Thrust, older rocks above, younger rocks beneath. A panoramic viewpoint offers spectacular views over the remarkable landscape of Assynt.

Perhaps the most memorable sculpture on the trail is a globe, composed of reck strata, sculpted by Joe Smith. Other information points offer verses written by poets, inspired by the landscape at Knockan.

Look for stonechat, song thrush, and meadow pipit along the trails. There are kestrels and ravens near the cliffs, and at higher elevations you can spot eagles and buzzards. The trail is exposed in places, therefore good waterproof footwear is advisable, and always, always dress for the weather! 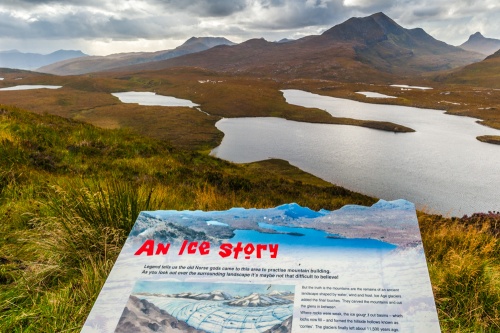 Knockan Crag offers an extraordinary window into geological conditions over 420 million years ago, when huge slabs of rock at the edge of the Caledonian mountains were pushed to the surface and forced over newer sedimentary layers of rock. 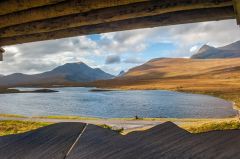 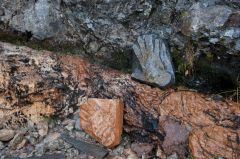 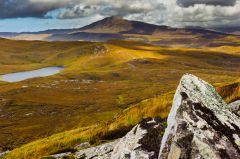 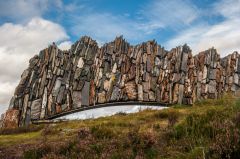 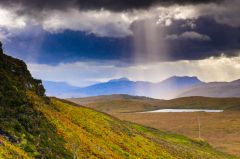 Nearby accommodation is calculated 'as the crow flies' from Knockan Crag National Nature Reserve. 'Nearest' may involve a long drive up and down glens or, if you are near the coast, may include a ferry ride! Please check the property map to make sure the location is right for you.

More self catering near Knockan Crag

The Rhiconich Hotel - 27 miles
Lairg, Highlands and Islands
Stay from: £48.00

The Royal Guesthouse - 38 miles
Dingwall, Highlands and Islands
From: £25.00

Self Catering near Ullapool