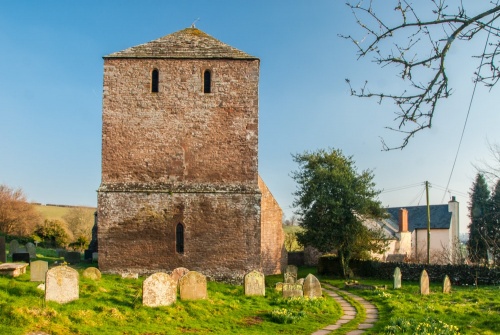 St Michael's Church in the Herefordshire village of Garway is an intriguing 13th century building on a rectangular plan, created from an earlier 12th century round church built by the Knights Templar. St Michael's is composed of a nave, chancel, and south chapel, joined to a detached 70 foot high tower by a 17th century passage.

The Templars built their churches on a circular foundation, in emulation of the Church of the Holy Sepulchre in Jerusalem. Garway has the only visible circular nave remaining in England. At the time of its foundation Garway was the most powerful Templar church in the Welsh Marches.

The exterior walls of the nave and chancel are notable for an intriguing collection of mason's marks, including a Maltese cross, a swastika, the Lamb of God, a Patriarchal Cross, Cross Fourchee, a winged dragon, and a Dextra Dei, or Hand of God, emerging from a cloud.

The most striking aspect of the interior is the chancel arch. This is of three orders. The outer order is the traditional Norman chevron, the inner made with surprisingly Moorish-style voussoirs (wedge-shaped stones). This Oriental-style design was a result of the Templar contact with Eastern design and architectural style in the Holy Land. 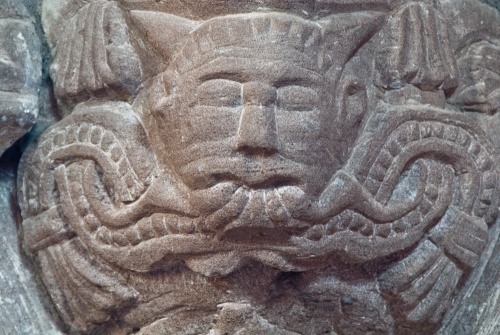 Oriental style aside, the most immediately obvious point of interest is a striking Green Man; a figure of a grinning human head with foliage emerging from its mouth. The Green Man was a common medieval motif, probably a remnant of much earlier pagan custom, but it is rare to find an example so wonderfully preserved as the one at Garway.

An arcade of two bays leads to the chancel, where a 13th century piscina is set into the wall. The head of the piscina has been carved with an intriguing set of markings, including a fish and snake (or eel) flanking a chalice and wafer symbol. A similar serpent symbol is cut into one side of the simple octagonal font.

The serpent in common medieval Christian use was a negative symbol, but in this context it is probably used as a positive symbol; in the Far East the serpent was a symbol of healing, and its use here may relate to the Templar dedication to healing. 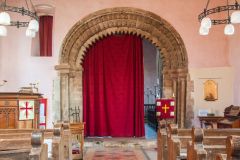 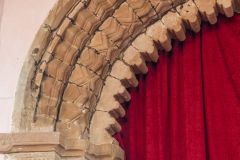 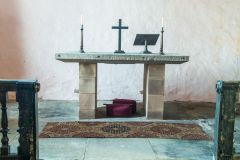 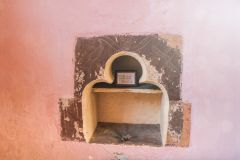 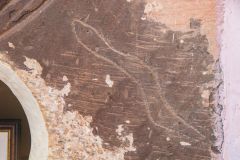 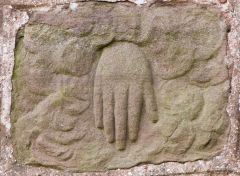 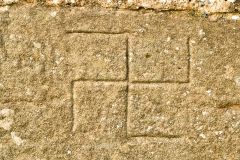