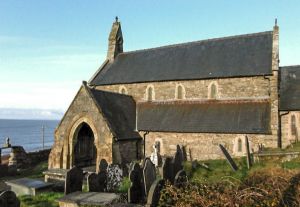 Llanaber Church
St Mary and St Bodfan is an early 13th century church based on a much earlier Celtic foundation. The church boasts the finest Early English architecture in any Welsh church, with a superb south door, a 16th century timber roof, and a pair of 5th century carved stones.

The roots of Llanaber's church go back to the 6th century, when a local ruler named Helig and his sons turned to religion after a great flood hit the north Wales coast. One son, Brothen, founded a church at Llanfrothern, while Boda and Gwynin founded a church at Dwygyfylchi. A third son, Celynin, has churches named for him at Llangelynin and Llangelynin, near Conwy. The fourth son of Helig came here, to Llanaber, and founded a simple church of timber, clad with wattle and daub to keep out the elements.

The Normans rebuilt St Bodfan's church in stone, and rather than eliminate the earlier dedication they simply added St Mary to it, giving Llanaber church its dual dedication to St Mary and St Bodfan.

The church benefactor was Hywel ap Meredydd ap Cynan, Lord of Ardudwy, relative of Llewelyn the Great, and great-grandson of Owain Gwynedd.

The finest feature of Hywel's church is the south doorway, considered the best example of Early English architecture in any Welsh church. The doorway is built of sandstone with 6 layers of moulding.

The nave piers are a combination of Norman and Early English, with 13th century lancets above in the clerestory. The man east window is another Early English lancet, with deep splays and shafts supporting the inner arch. Taken as a whole, the architecture is a superb example of 13th century work.

The nave and chancel roofs are 16th century, with a panelled roof over the sanctuary, with gilded bosses. Most of the window glass dates from a Victorian restoration, and most of the monuments are 19th century. The font bowl is modern but it stands atop a much older shaft, possibly medieval. Near the south door is a warden's chest, carved from a single log, and there are a pair of collection boxes dated to 1754 and 1756.

In the north west corner of the church stand the most interesting historic features at Llanaber; a pair of early Christian carved stones, perhaps dating to as early as the 5th century. One of these stones was found being used as a footbridge for the nearby farm of Ceilwart Isa.

It bears an inscription reading 'CAELIXTUS MONEDO REGI', or, 'Calixtus, King of Mona'. The other stone is inscribed AETERN(I)/ET/AETERN(E), perhaps representing a brother and sister buried together. Both stones are presumed to be memorials, or grave markers for important local people.

The church is usually open daily for visitors, and there is a layby for parking just outside the churchyard.

More self catering near Llanaber Church >> 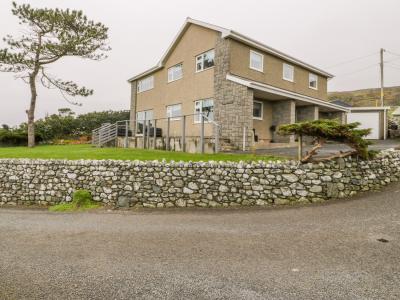 A detached property situated within the village of Llanaber. It houses five bedrooms and can sleep up to 10 people.
Sleeps 10