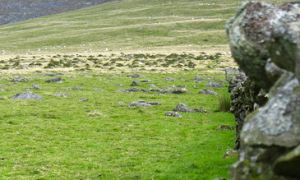 Ffrid Newydd
The remains of two stone circles lie beside a footpath in open countryside near Tal-y-Bont. Very little remains of the circles.

There are a pair of badly damaged stone circles beside the footpath from Tal-y-Bont and Dyffryn Ardudwy.The smaller circle lies to the north, the larger to the south. The stones are set around a broad raised earthwork, like an embanked circle.

You'll have to use your imagination to get much of a feel for Ffrid Newydd, though the location is lovely.

Do not confuse this Ffrid Newydd with the one near Llanfairfechan! You may see this site referred to as Hengwm Stone Circles, which is the designation used by Coflein.

Ffrid Newydd is directly beside a major footpath, accessed from the eastern edge of Dyffryn Ardudwy. The footpath starts at the end of Ffordd Gors in the village (near Cors-y-Gedol hall) and heads south to cross the Afon Ysgethin at Pont Fadog before striking off in the south-easterly direction uphill.

The pair of stone circles at Ffrid Newydd are immediately beside the path on the south westerly slope of the hillside, about 1 mile from the bridge. There are also other footpaths linking to the main one, from Tal y Bont and the reservoir at Eithin-fynydd. A good OS map is really essential for finding your way!

More self catering near Ffrid Newydd >>