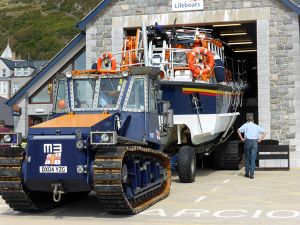 Barmouth RNLI Lifeboat Museum
Administered by the Royal National Lifeboat Institute, the museum traces the history of this most essential and heroic occupation through models, photographs, and historical memorabilia.
History
The first RNLI station at Barmouth was built in 1828 at a cost of 95 pounds. This was replaced by a new boathouse in 1859, and then in 1885 a slipway was added to make it easier to launch lifeboats. In that year the lifeboat Jones-Gibbs was stationed at Barmouth and remain in service for the next 20 years.

In 1904 the old boathouse and slipway had to be enlarged to prepare for a new, larger boat. During the construction project a pair of workmen were killed by a sudden rock fall. The project was finished in 1905 and a new Jones-Gibb lifeboat replaces the original. This second boat remained in service until 1939. It was later refurbished and is now used as a pleasure craft on the west coast of Scotland. The original lifeboat station was sold in 1921.

The first motor-driven lifeboat was the Laurence Ardern Stockport, which came to Barmouth in 1939. The new boat was capable of navigating very shallow waters, and it stayed at Barmouth until 1951. A completely new boat called The Chieftain arrived in 1949, built in Cowes and costing GBP 9,943. The Chieftain was in turn replaced by The Princess of Wales in 1982. Princess Diana officially launched the boat on 25 November 1982. This was the first lifeboat at Barmouth to be fitted with radar.

The station marked its 175 anniversary in 2003. It is operated as an 'explore' station, which means that visitors are free to explore the station, look at lifeboats up close, and get a sense of what is involved in operating a lifeboat station. Depending on staff availability visitors can go inside the station and look around.

Displays cover the long history of the station, and tell the story of rescues performed from here. Find out about the work of the RNLI, see crew equipment, and old photos of boats and their volunteer crews. And learn the story of the volunteer who had to leave his wedding reception to perform a rescue, with his wedding suit under his oilskins. Rescue finished, he took off the oilskins and went back to the reception.

Since the lifeboat crews perform regular exercises, you stand a good chance of seeing the lifeboat being launched! 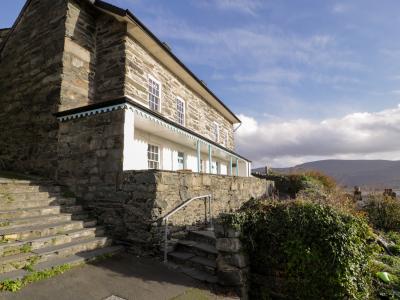 This Grade II listed property is located among the streets of old Barmouth in North Wales and can sleep nine people in five bedrooms.
Sleeps 9 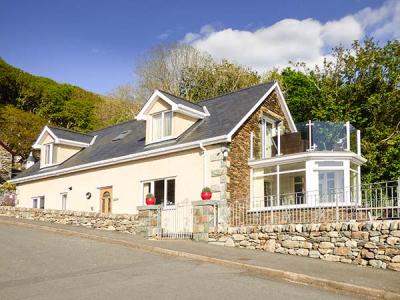 This superb detached property is situated close to the town of Barmouth and sleeps six people in three bedrooms.
Sleeps 6