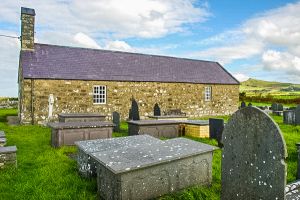 Llanfaelrhys, St Maelrhys Church
St Maelrhys Church is a single chamber building with a medieval nave and a later chancel. The interior features a 15th century font and a mix of wooden benches and box pews that date to the mid 19th century.
History
The single-celled church at Llanfaelrhys was said to have been founded by Maelrhys, an early medieval saint from Brittany. Maelrhys was a cousin of of both Cadfan and Hywyn, and came to the Lleyn with them. Hywyn established a church at Aberdaron, looking over Cardigan Bay, but Maelrhys chose a secluded site further east, overlooking Porth Ysgo. His church was dependant on the larger church at Aberdaron.

Several rather intriguing stories have arisen about Maelrhys. One story says that he was a trader from south Wales who sold flour to the locals. When he realised that they had no place to worship, he used his profits to build the church.

Another story says that a pair of men broke into the church and made off with anything of value that they could carry. As they crossed the parish boundary they were instantly turned to stone. The stones were called Lladron Maelrhys (Maelrhys' thieves), but no trace of them can be found today.

But what of the church itself? It is an extremely simple building, only about 35 feet long and 13 feet wide. The nave is medieval, but the chancel was added much later. The main west door is round-headed, in Romanesque style, but it is modern, inserted after the medieval north door was blocked.

The interior is intriguing, for the north side is filled with plain wooden benches, while the north side has box pews. The oldest interior feature is an early 15th century octagonal font with a carved cross on the north face. The communion table is early 18th century. At the south end of the church wall is a mounting block used by parishioners attending services on horseback.

Other than that the real appeal of St Maelrhys' church is its wonderful secluded location in the lovely coastal scenery of the Lleyn peninsula.