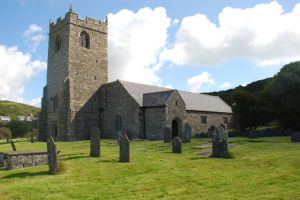 The first church at Llanengan dates to at least the 13th century. During the later Middle Ages it became an important pilgrimage site, and housed the shrine and effigy of St Engan, or Einion (also known as Einion Frenin). Engan was a late 5th century ruler of the Lleyn peninsula, the brother of Cuneglas, king of Rhos, and brother of the saints Meirion and Seiriol. Engan granted land for Seiriol to found Penmon Priory on Angelsey, and convinced Cadfan to establish an abbey on Bardsey Island, off the tip of the Lleyn.

Engan founded the first church at Llanengan, and though he may later have joined the religious community on Bardsey, his relics were claimed by Llanengan church, and a shrine established here.

Around 1520 that medieval church was completely rebuilt, with the earlier church becoming the nave of the new, much larger building. The west tower was added in 1534, at the same time as the south porch and the pair of wooden screens, one across the nave and another across the south aisle.

It is the screens that really make St Engan's church so rewarding to visit. The screens are thought to have been brought here from Cymer Abbey. They were restored in 1847 and again in 1911 and yet again around 1980. Each screen is two bays wide, and the south screen retains its rood loft. The carving is beautifully detailed and very well preserved.

In addition to the screens is a 17th century communion table, a late medieval font, and a 17th century memorial to Katherine Owen of Creigir. The east window contains fragments of Victorian glass made by CE Kempe.