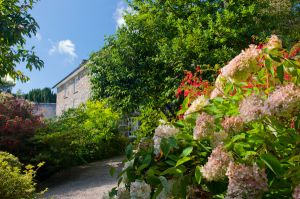 A small 16th century manor house surrounded by extensive gardens, offering wonderful views over Hells Mouth Bay. There was a fortified house at Plas yn Rhiw as early as 900 AD. The house was restored by the three Keating sisters in the 1930s and has been restored by the National Trust to the way it would have been during their tenure in the 30s.
History
There has been a house on the hillside overlooking Hell's Mouth Bay for over 1000 years. The earliest dwelling we have a record for is a fortified house belonging to a nobleman named Meirion Goch around 900 AD. Meirion Goch was the grandson of Rhodri the Great (Rhodri Mawr), the first king to rule all of Wales. In the 15th century a new manor house was built, as the centrepiece of a farm with stables, barns, and worker's cottages. The manor house owners eventually adopted the surname of Lewis, after the English fashion, and for the next 250 years they held the manor.

The house we see today was built in the early 17th century. A date stone on a window lintel bears the date 1634 and the initials 'I.L.', for John Lewis. A later owner was Cyril Williams, who tried to launch a plan bringing a railway to Porth Dinllaen, linking to an Irish ferry, only to have the plan fail to gain enough support in the House of Commons. In the early 20th century the house was leased to Lady Strickland of Sizergh Castle, who introduced the first bathtub into the house. The tub is now a garden feature!

In 1938 three elderly sisters named Eileen, Lorna and Honora Keating purchased the house after they discovered that they were descendants of the original owners. The rather eccentric ladies restored the house, calling on the expertise of Sir Clough Williams-Ellis for advice. They also restored the gardens around the house. The front facade was given a Georgian style, and 16 sash windows were added.

The Keating sisters said that they had found a priest's hole in the old staircase, a relic of the days when Catholics were hunted down. No evidence can now be found of a secret hole, however.

In the 1940s the Keatings gave Plas-yn-Rhiw to the National Trust in memory of their parents. The sisters are all buried in the churchyard at Porth Ysgo, 3 miles away. The house interiors have been carefully restored to reflect the house in the late 1930s when the 3 sisters lived here. See family photographs, household objects, and paintings. See how the sisters restored the house to its original appearance, stripping away 1816 stucco to reveal the stone walls that give the house so much of its character.

Ghostly Goings On
Plas yn Rhin is reputed to be haunted by several ghosts; one the spirit of a drunkard from the 18th century who prowls the stairs looking, presumably, for something to drink.

Another spectre is a Victorian girl named Annie Williams, the daughter of the house owner, who married a tinker against her family's wishes. The couple eloped, and made for Holyhead, before the tinker abandoned the young woman. She never returned home, and no one knows what became of her. but the sound of her crying can sometimes be heard in the upstairs bedroom that was once hers. Annie Williams may also be a spectral figure in a white dress who has been reported in the house.

The Gardens
Below the house lies a formal garden with flowering shrubs and trees, with colourful rhododendrons, azaleas, and magnolias, separated by formal hedges and grassed pathways. Old farm buildings are used as landscape features. One of the main features is a formal parterre named for Lady Strickland. The original garden has been extended by the National Trust to include 150 acres of surrounding woodland, including a snowdrop wood overlooking the garden.

Visiting
I came to Plas yn Rhiw on a gorgeous sunny day in summer. The gardens were so lush with colour and luxuriant growth that they threatened to overwhelm the house itself. Though the house is described as a manor, it is not large, and the gardens are crammed around it so that the house almost disappears beneath greenery. But the location more than makes up, with absolutely stunning views out over the water. The house is full of interest, and the story of the three Keating sisters makes the history of the property come alive. Its a fascinating place to spend an hour exploring. Just bring your camera if you come on a sunny day in summer!

More self catering near Plas-yn-Rhiw >>

More bed and breakfasts near Plas-yn-Rhiw >>