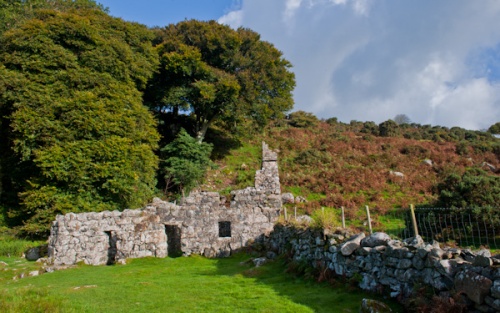 In a secluded woodland, the remains of ruined stone buildings stand guard over an ancient well to which curative powers were attributed. There are two well chambers plus an adjoining caretaker's cottage.

St Cybi is reputed to have lived in the area in the 6th century (indeed, the nearby church is named for him). It is not certain when the well chambers were built, but the cottage dates from the 18th or 19th century.

St Cybi's Well is one of many holy wells scattered throughout Wales, many of which were thought to have curative properties. It seems probable that many wells were of pagan origin, and were only much later attributed to Christian saints.

St Cybi's has been a destination for pilgrims for centuries, and there are accounts from the 18th century stating that the well waters cure a range of afflictions from blindness to warts. 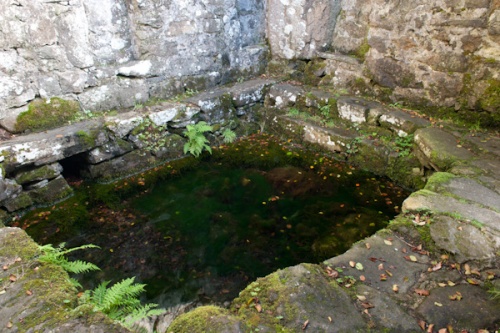 A typical curative treatment for such complaints consisted of drinking equal amounts of seawater and well water, bathing in the well, and then resting in the cottage to wait for the cure to take effect.

The main well chamber has a deep recess at the centre, suitable for bathing. A channel runs from this chamber, under the wall, to the second well chamber some metres away, which would have been more suitable for drinking.

Note: The path to the well crosses several fields and runs beside a stream, and the path can be very muddy in wet weather, so please wear appropriate footwear!

There are some places that just seem to exude a sense of something special, an ambience of peace, or mystery. St Cybi's Well is one of these places. Exploring the Well is like visiting a holy place, a shrine, or a medieval cathedral. A sense of age and something quite magical clings to the crumbling stones. It is like stepping back in time. 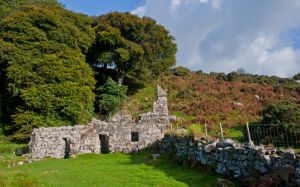