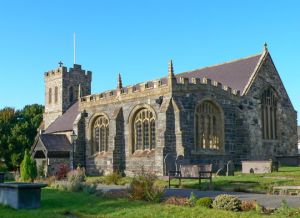 St Grwst's church was built to atone for a murder. The story goes that in the 12th century a nobleman named Nefydd Hardd killed Idwal, the son of Owain Gwynedd. In 1170 Rhun, Nefydd's son, built a church to atone for his father's crime. He chose to dedicate the church to Grwst, a 6th century saint whose cell stood nearby. Nothing remains of Rhun's 12th century church, for it was badly damaged during Owain Glyndwr's rising in the early 15th century. The church was then completely destroyed in 1468 during the Wars of the Roses.

The oldest part of St Grwst's church is the 15th century nave, built around 1470, just 2 years after the destruction of the earlier building. The tower is from a 19th century rebuilding, as is the north aisle. In 1633 Richard Gwyn of nearby Gwydir Castle added a family chapel in the south east corner of the building. Both tower and chapel have castellated parapets, echoing the style of a medieval castle.

The highlight of St Grswt's is a superb 15th century rood screen, considered to be the finest medieval screen in Wales. Unusually, the screen still has its loft; most were destroyed at the Reformation (as were most screens). The screen spans 12 bays, with a central doorway. The panel tracery is wonderfully detailed, with sinuous vines, and images of pigs eating acorns. The screen is thought to have been brought from Maenan Abbey in 1537 after the abbey was dissolved by Henry VIII.

Other historic features include a royal coat of arms to George III, and monuments to the Wynn family. Not on display, but viewable by appointment, is the spur used by Dafydd ap Siencyn, a 15th century outlaw who lived near Gwydir Castle.

Dafydd has been called the 'Robin Hood' of the Conwy valley. He fought with the Lancastrians in the Wars of the Roses and burned Denbigh, only for Edward IV to retaliate by laying waste to Caernarfon and Meironnydd. You can also see an exceptionally old bell thought to be 5th century. The Llanrwst Bell was originally used as a cow bell, but was adapted for use by the church. 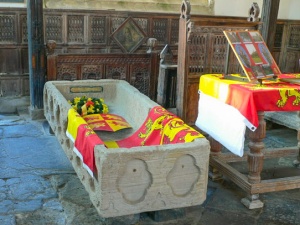 Though the screen and fittings in the body of the church are excellent, most people will probably visit to see the Gwydir Chapel, and its mysterious 13th century stone coffin, said to be that of Llywelyn the Great. Llywelyn died in 1240 and was buried in Aberconwy Abbey. When Edward I captured Conwy in 1283 he forced the abbey to relocate to Maenan.

When the monks left they took with them the coffin of Llywelyn - with the body inside. When Henry VIII suppressed the abbey at Maenan, the coffin, but not the body, was brought to Llanrwst.

There is no coffin lid, but the elaborate carvings on the coffin base suggest that the lid must have been elaborately decorated. The ancient flag of the princes of Cwynedd is often lain inside the coffin or nearby.

Can we be certain that this is truly Llywelyn's coffin? Well, historians have analysed the stone and found that it comes from the same quarry as that used to make the sarcophagus used for the tomb of Joan, Llywelyns wife, at Beaumaris on Anglesey. That would suggest that the coffin is genuine.

A stone effigy of Hywel Coetmor lies nearby. Hywel was the illegitimate son of David, Prince of Wales, and died in 1388 while fighting for Edward, the Black Prince, in Flanders. According to tradition, Hywel's descendants sold Gwydir to the Wynne family.

The chapel was erected by Sir Richard Gwynne, possibly to a design by Inigo Jones. Though generations of Wynnes are buried within the chapel, Sir Richard himself is buried in Wimbledon. The chapel has a beautifully decorated wooden ceiling, with heraldic devices, including one commemorating Sir Richard's wife Sara. Look for the large, ornate monument to Maredudd ab Ifan.

This ground-floor lodge rests in Llanrwst, Conwy and can sleep six people in three bedroom.
Sleeps 6 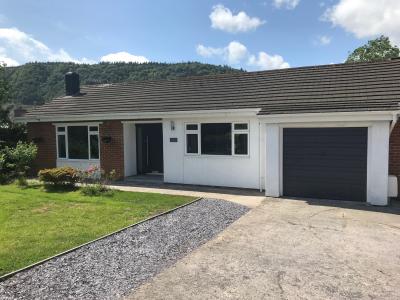 This detached property rests within the town of Llanrwst and sleeps up to six people, in three bedrooms.
Sleeps 6