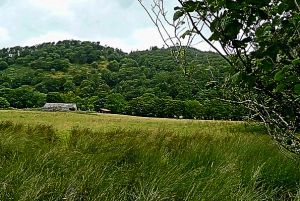 The location of the Roman fort at Bryn-y-Gefeiliau
A small 1st century Roman fort stood beside the River Llugwy in the scenic Llugwy Valley. The fort was occupied from about AD 90-120 and may have been built to control lead mining and smelting in the area.

Bryn y Gefeiliau, also known as Caer Llugwy, is a Roman fort set in beautiful countryside in the Llugwy Valley, just south of the river. The site was built around AD 90 and was intended to house a garrison of 500 auxiliary soldiers. The fort enclosed an area of about 4 acres and was defended by an earthwork rampart built upon a foundation of cobbles. It stood near the line of a road from the forts at Caerhun and Tomen-y-Mur.

Around AD 120 a new fort was built in stone across the eastern rampart walls of the earlier fort, creating an annexe of about 2 acres. A large courtyard building of stone was built within this annexe. This building, thought to be a mansio, still stands to a height of 3 feet in places. The site was probably abandoned around AD 140 though it may have been used intermittently after that time.

Why did the Romans built a fort here? A clue lies in the name; Bryn y Gefeiliau translates as 'Hill of the Metalsmiths', suggesting that the fort was established to control lead mining in the region.

The fort was excavated in the 1920s, and a large quantity of pottery was unearthed, most dating from the period AD 90-120. Finds from the site are preserved in the Gwynedd Museum in Bangor.

The site is on private land but the location is easily visible from the roadside. What makes Bryn y Gefeiliau so interesting is that the valley has remained almost unaltered by time, so that what we see today - apart from the obvious farm buildings beside the site - is essentially what the Romans would have seen.

Unfortunately, though the outline is clearly visible on OS maps and aerial photographs there is very little to see on the ground. Most of the stone from the fort was robbed for local building projects over the centuries. There are bits and pieces of Roman stones built into many of the nearby farm buildings and field walls. 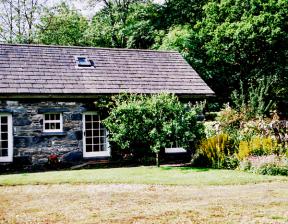 This property offers cosy and welcoming accommodation for a couple looking to get away from it all. Originally a stone-built cottage, it has been tastefully and lovingly restored and redecorated …
Sleeps 2 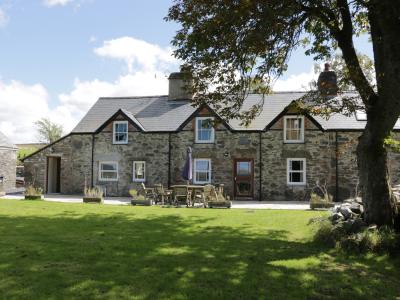