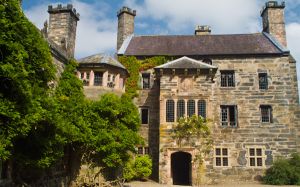 Gwydir Castle is a fortified manor house built around 1500 by the Wynn family, with 17th and 19th century additions. The Tudor courtyard house sits amid Grade 1 listed gardens with a large peacock population. Gwydir is known as one of the most haunted houses in Wales.

Gwydir Castle is not a castle, and indeed, has only nominal defences. It was built primarily for show, by the Wynn family, one of the most powerful and influential families in north Wales.

The Wynns chose a site that had been in use for hundreds of years. There was a fortification at Gwydir since at least the 6th century, and the area was fought over by Welsh princes for centuries. A simple manor house stood on the site as early as the 14th century, and following the Wars of the Roses that medieval manor was rebuilt by Meredith ap Ieuan ap Robert, first of the Wynn dynasty. Wynn's new manor incorporated stones from Maenan Abbey, including an entire spiral stair from the abbey ruins. Around 1540 a turret was added to the tower, and a large and impressive gatehouse added in 1555. 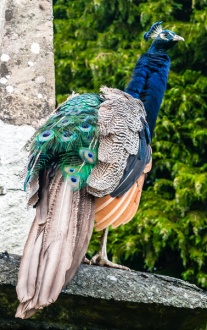 One of the resident
Gwydir peacocks

The most famous resident of Gwydir was Katherine of Berain, (1541-1591), known as 'the Mother of Wales' for her large number of noble offspring and relations. King Charles I stayed here in 1645, and would have seen the large cedar trees in the garden, planted to commemorate his marriage to Henrietta Maria in 1625.

The Duke and Duchess of York, later King George V and Queen Mary, stayed at Gwydir in 1899. They got their own trees, too; a series of Welsh oaks. Also in the grounds is a yew tree known as the 'Lover's Yew', thought to be between 600-1000 years old.

By the time of the royal couple's visit, Gwydir was entering a long period of decline. By the early 20th century the castle was in ruinous state, and ripe for plucking by William Randolph Hearst, the American media mogul. Hurst purchased the entire 1640s panelled dining room and had the gilded panelling boxed and sent to the USA.

After Hurst's death the panelling was owned by the Metropolitan Museum of Art in New York, but was never taken out of its storage crates. Gwydir was saved from complete ruin by Peter Welford and Judy Corbett, who bought the castle and spent decades slowly restoring it. They negotiated for the return of the dining room panelling, and it has now been reinstalled in its original setting.

The dining room is the undoubted star of the show at Gwydir. The rich carving and amazing detail is worth a special trip to see. I've visited twice now, and each time my jaw dropped on entering the room.

One thing I didn't see on either of my visits was one of Gwydir's famous ghosts. The most frequently encountered ghost is a Grey Lady, though the spectre of Sir John Wynn has been reported, as well as a ghostly monk, reportedly trapped in a tunnel leading from a secret chamber.

Gwydir is a delight to visit; a rambling, fascinating house, full of hidden corners and historic rooms that seem to grow organically one from the other. This is not a show-home, or a museum piece; don't come expecting a stately home! Its a wonderful evocative historic house, full of atmosphere and an absolute pleasure to explore.

If you have the time, ask the attendant for keys to Gwydir Uchaf Chapel. Its about a 5 minute walk from the castle - or 1 minute by car. The chapel was built in 1673 by Sir Richard Wynn of Gwydir and features a wonderfully colourful painted ceiling. 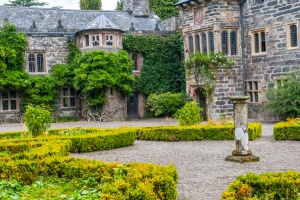 The courtyard and formal garden 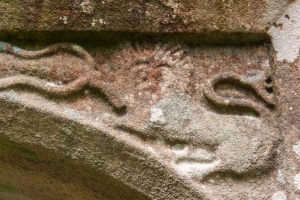 Heraldic carving over a doorway arch 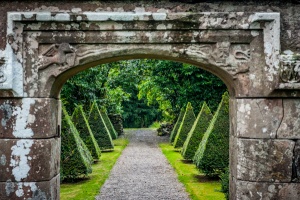 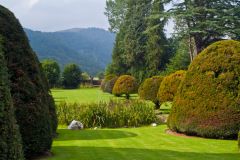 More self catering near Gwydir Castle >> 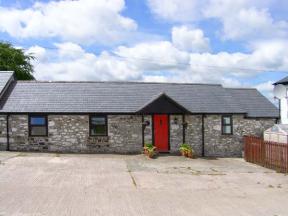 This wonderful, end-terrace barn conversion on a non-working farm near Llanrwst can sleep four people in two bedrooms.
Sleeps 4 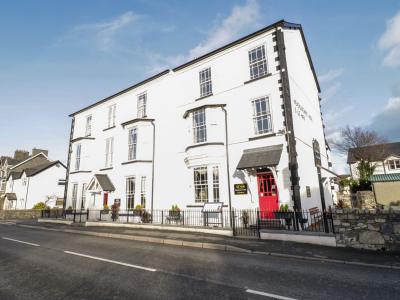 A first-floor apartment property, situated within the town of Llanrwst. It houses four bedrooms and can sleep up to eight people.
Sleeps 8