HERITAGE HIGHLIGHTS:   On the site of St David's hermit cell 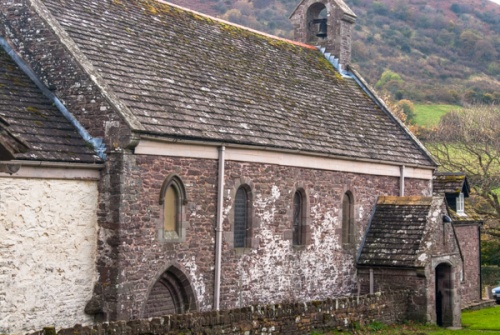 Literally in the shadow of the ruined arches of Llanthony Priory stands the tiny 12th-century church of Saint David. This low stone building stands on one of the most sacred sites in Wales; a 6th-century cell established By St David (Dewi Sant), the patron saint of Wales. It is very likely that a monastic settlement grew up around David's cell.

The usual form of such a settlement was a cluster of timber huts centred on a church, with the whole site enclosed by a 'llan', often a circular stone wall. There has never been a proper archaeological investigation of the church site, but it seems likely that any traces of a llan were lost when the nearby priory was built in the early 12th century. 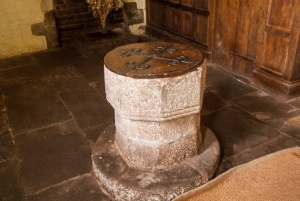 The church is inextricably linked with the Augustinian priory, which was founded when a nobleman named William de Lacy was out hunting. He took shelter in the crumbling ruins of St David's church here, and was so moved that he vowed to become a hermit and build a new monastic community on the site.

At least, that's one version of events. A simpler, less romantic version is that Lacy sent his chaplain, a man named Erisinius, to build a church here on the site of St David's cell. Alternatively, Erisinius may have served as chaplain to Queen Matilda, the wife of Henry I.

The priory was founded as a simple hermit cell in 1108, but a decade later a full house of Augustinian canons was established, under the leadership of Erisiius, and with the backing of Anselm, the Archbishop of Canterbury. 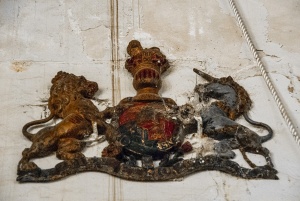 The focus of Llanthony then shifts from the church to the new priory, but it seems the church was still functioning throughout the medieval period. The building we see today is late 11th or early 12th century (the sign on the church wall proclaims it to be 11th century).

The most interesting historic features inside the church are a very plain octagonal font, decorated only by two thin incised lines around the base of the bowl. At the west end is a very low brick arch that looks rather like a blocked chimney. There are low, rounded blocked archways on both north and south walls of the nave, and a deeply splayed lancet window over the pulpit.

There are several interesting 18th and 19th-century wall monuments in the chancel, and one other interesting feature is that the church altar is aligned so that it points towards the rising sun on 1 March, St David's Day.

The church is open daily to visitors, which is not surprising, as I can't imagine any place less likely to be troubled by vandalism than this beautifully remote setting. 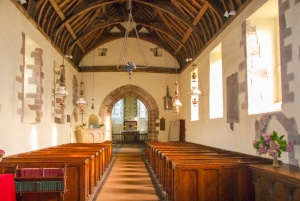 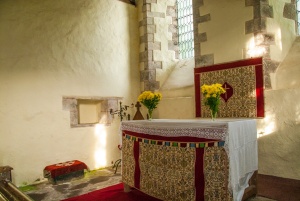 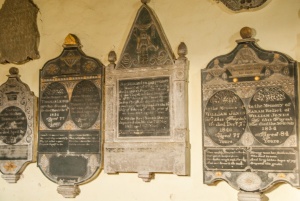 More self catering near Llanthony

More bed and breakfasts near Llanthony