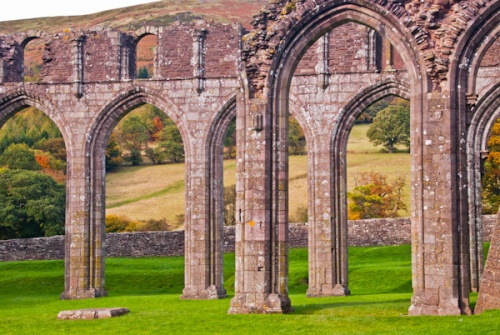 This ancient monastic ruin stands in one of the most isolated and beautiful locations of any medieval monastery in Britain, in the magnificent scenery of the Vale of Ewyas, on the edge of the Black Mountains.

Llanthony began shortly after the year AD 1100 when a pair of hermits named Ernisius and William de Lacy settled here. It seems that William was out hunting, and was forced to find shelter in an ancient church here, reputed to stand on the site of a 6th-century cell founded by St David, the patron saint of Wales.

The hermits soon gathered a group of followers, and together they built a small church, which was consecrated in 1108. Just a decade later, in 1118, it became a full-fledged house of Augustinian canons, making it one of the earliest Augustinian houses in Britain. 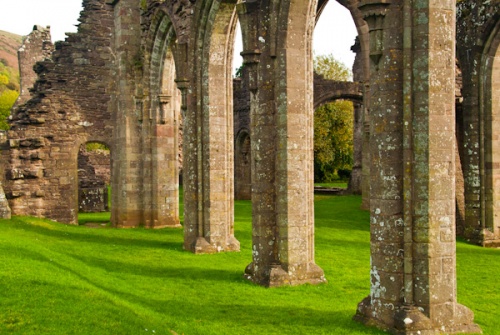 Columns in the nave

The Augustinians, known as Black Canons because of the dark robes they wore, did not withdraw from the world as other orders did; they went out into the community to preach. In the 1130s, when Civil War broke out in England between King Stephen and Queen Maud, some of the Llanthony canons took refuge from the conflict in Gloucester.

There they built a small priory, called Llanthony Secunda (Second Llanthony). This 'daughter house' eventually grew larger and wealthier than the mother house at Llanthony itself.

Grants of land from local patrons enabled the canons of Llanthony to begin building a range of monastic buildings. The church was built first, over the years 1180-1220, followed by a range of buildings around a cloister, including a chapter house, where the daily business of running the priory was discussed. Further buildings included a Prior's lodging to the west, a site now occupied by the Abbey Hotel.

The monastic church was said to be one of the great early medieval buildings in Wales. It was built on a cruciform plan, with a huge central tower over the crossing and a pair of smaller west towers. The east end of the church ruins shows round-headed Romanesque arches common to the Norman period, while the west end shows more pointed arches, a design that evolved in the Early English period of the early 13th century. So from this we can assume that the east end of the church was erected first, then the builders gradually worked their way west. 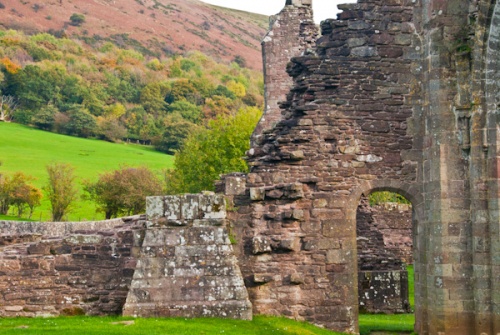 Ruined walls with the Welsh hills beyond

The remote setting of Llanthony on the Welsh Marches made it a target for attack. The 12th-century historian Giraldus Cambrensis (Gerald of Wales) described it as 'fixed amongst a barbarous people'.

The priory was dissolved in 1538 by Henry VIII, and the 4 remaining canons and the prior were given pensions. The monastic buildings were sold for 160 pounds, but the site was never developed and the buildings were allowed to decay.

By the 19th century large sections had collapsed. The antiquarian Richard Colt Hoare (of the family that owned the Stourhead estate in Wiltshire) was present in 1803 when the great west window finally collapsed. 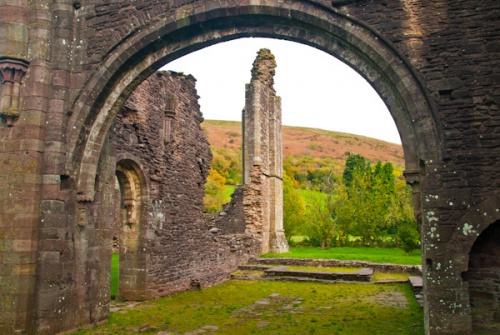 Looking through a medieval archway

Arguably the most impressive feature of the priory ruins is the north aisle arcade. Eight bays of the arcade still stand, with part of the triforium above. The west facade of the church is in quite good condition, with a row of simple arches at ground level supporting round-headed arches and blind lancets above.

Very little of the cloister ranges have survived, and the best parts have been converted into the nearby farmhouse and hotel.

Immediately beside the priory is St David's church, built on the site of the 6th-century monastic cell built by St David himself. The church has welcomed pilgrims since shortly after St David's death and is considered one of the most important sacred sites in Wales.

Aside from its sacred connections, what makes Llanthony so impressive today is its setting; the wild and scenic landscape is awe-inspiring. 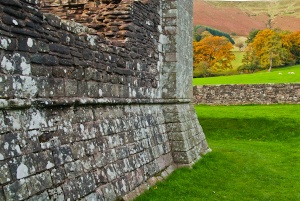 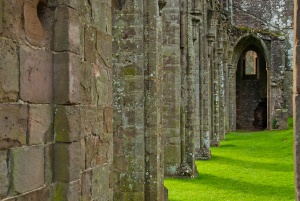 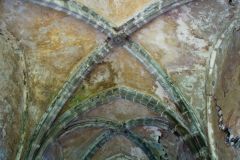 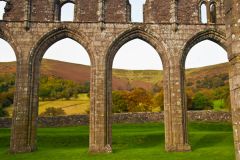 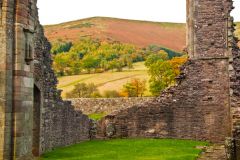 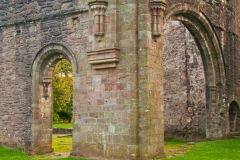 More self catering near Llanthony Priory >>