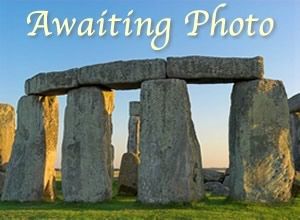 Mynydd Y Gelli (Welsh Stonehenge)
Mynydd Y Gelli is a complex jumble of small, scattered stones in a rough circle of 30 feet diameter within a low embankment. The circle stands near 3 cairns, one an unusual platform cairn design. Beside the platform cairn is a small standing stone, now fallen.
The site is rather romantically dubbed The Rhondda Stonehenge, which is a bit of grandiose poetic license. It was so named by Rev. John Griffiths, who investigated the site in 1903. Griffiths was heavily influenced by the work of Sir Norman Lockyer, who was a keen advocate of the idea that ancient stone circles and similar monuments were tied to ritual observance of astronomical events like solstice sunrises, alignment of planets and stars, and similar events.

Unfortunately, on Griffith's death his sister destroyed his work. She was a devout Christian and believed that her brother had been led into dangerous territory with his belief in astro-archaeology and Druidic religion. So we will never know what Griffith found at the site, and that's a shame, because it has never been properly studied since then.

It is difficult to find the site; indeed, numerous people report having to take several goes before eventually finding the stones! Your best bet is to park in Gelli village and make for Bwllfa Farm; or better yet, ask a local resident. The site is basically a large field with scattered stones and ruined shepherd huts, so it can be hard to make out at first.

About Mynydd Y Gelli (Welsh Stonehenge)
Address: Gelli, Glamorgan, Wales
Attraction Type: Prehistoric Site
Location: Access by a footpath south of Gelli, off the B4223. Immediately beside the council landfill. Not signposted and difficult to find.
Location map
OS: SS976941