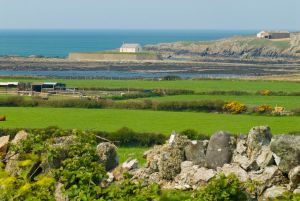 Aberffraw
Aberffraw Roman Fort is a 1st century Roman military fort, with two occupation phases. The site of the fort is underneath the current village.
Excavations in the 1970s uncovered evidence of an enclosure, defended by a 13-foot wide ditch and earthwork bank. It appears that the ditch was filled in with material from the bank, suggesting that the Romans had withdrawn from the fort in an orderly manner rather than simply abandoned the site.

A second phase of development shows a V-shaped ditch, 12 feet wide and about 5.5 feet deep. A final phase of occupation shows yet another ditch, this time U-shaped. Like the second ditch, this was allowed to gradually silt up over time.

Judging by the style of construction it appears that the first two ditches are Roman, while the 3rd ditch enclosure may be medieval. The Roman fort may possibly be the garrison site mentioned by the historian Tacitus in his account of the Roman conquest of Anglesey by the general Suetonius Paulinus in AD 60.

Finds during excavations included Samian ware pottery and coarse grey-ware. The medieval occupation may be linked to a 13th century complex of court buildings.

Unfortunately there are no obvious remains of the fort to be viewed, though Aberffraw itself is a pretty village in a lovely location near the coast. While in the village, look for the 'church in the sea'; the 7th century church of Saint Cwyfan, on an island just offshore.

More self catering near Aberffraw >>

More bed and breakfasts near Aberffraw >> 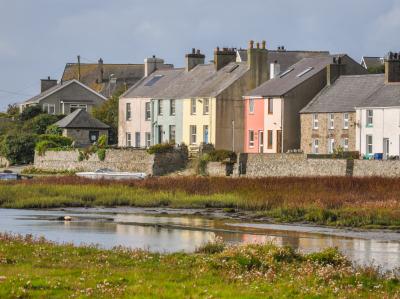 This coastal, cosy cottage is located just outside of the village of Aberffraw on the south west coast of Anglesey in North Wales and can sleep six people in three …
Sleeps 6