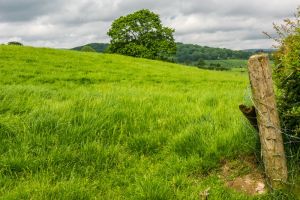 Caerau Roman Fort
Caerau is a small 1st century fort lying beside the course of a Roman road just south of Beulah. According to a 19th century account, cartloads of earthenware pottery were found during ploughing'.

About AD 75 the Romans built a fort halfway between larger forts at Llandovery and Castell Collen. The fort was rectangular in shape, about 170 metres by 110 metres, oriented north-east to south-west and enclosing an area of about 4.75 acres (1.9 hectares). The size suggests that the fort was built to hold a mixed regiment of cavalry and infantry numbering around 500 men. The fort continued in use until well into the 2nd century and was finally abandoned sometime after AD 120, early in the reign of Hadrian.

The initial defences were built of turf and clay, atop cobble foundations, with a pair of ditches. The 2 ditches were later filled in and replaced with a single ditch. The first buildings were of timber, but we know that a stone granary was built in a second phase of construction.

The Romans carefully chose the location to take advantage of the terrain. The fort stands on the top of an isolated ridge looking over the River Carnarch. Archaeological investigation has found evidence of a courtyard building in one corner of the site. There is also evidence of a small civilian settlement to the north-west of the fort, where pottery, tile, and brick were discovered. One piece of pottery was inscribed with the name DOCI (perhaps Docilis, or Doccius) an important potter who also worked at Wroxeter.

The fort may have been reduced in size at some point, to about 115 metres square, with a sharp scarp cutting through the site. This scarp, with a gate roughly halfway along its length, suggests that the fort changed in use and held fewer men, perhaps solely infantry, who would not need the space used by the cavalry's horses. 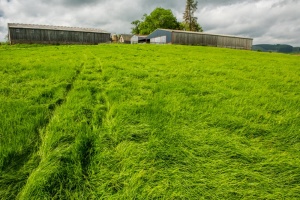 View from the fort to Caerau Farm

There are gateways in the north-west and north-east walls. The south-west defensive ditches are partly obscured by a later Norman motte known as Twdin.

Ploughing has gradually reduced the height of the earthwork defences, which measure about 4-5 feet high.

The fort is immediately beside the Roman road between Cefn Glancamddwr and the A483 just outside Beulah. There is a footpath from the Roman road heading directly through a cluster of buildings at Caerau and immediately south of the fort.

On the opposite side of the river lie a pair of Roman military practice works, and just 400 metres to the north-west stands a temporary marching camp.

Finding the fort is tricky, and an OS map is extremely useful. There are no signs whatsoever. In theory there is a footpath from beside the bridge on the A483 that leads directly through the fort to Caerau Farm. I say 'in theory' because when we visited the footpath was so overgrown as to be almost impassable, and was obscured by undergrowth so badly that the start of the path was invisible from the road.

Here's what we did. We walked up the drive to Caerau Farm, following the course of a public footpath. As we reached the farm we could hear voices in the farmyard, and we found the farmer at work. We asked about visiting the fort and he very cheerfully gave us instructions that involved walking straight through the farmyard, through two gates, and straight into the field below the farm. He did say that there wasn't much to see, and he was right!

Even with the aid of an OS map, standing in the middle of the fort, it is very difficult to make out the fort outlines or any sign of earthworks. You can, however, see why the Romans chose this elevated spot overlooking their road below. 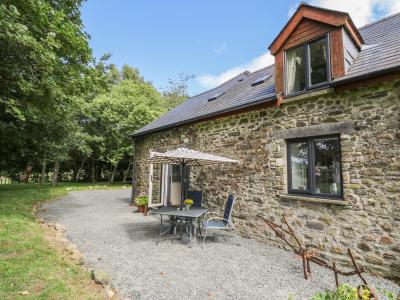 This barn conversion is resting close to the village of Beulah, near Builth Wells, and can sleep four people in two bedrooms.
Sleeps 4