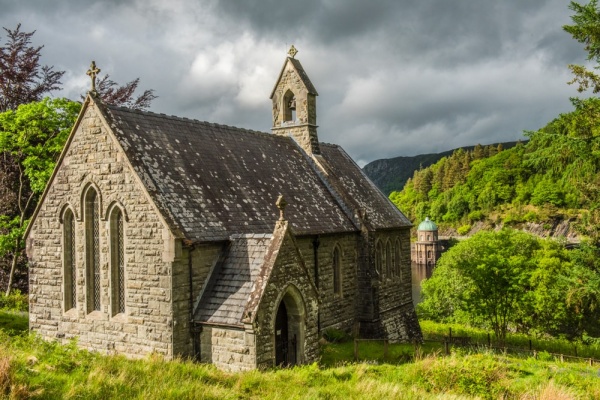 In 1893 the City of Birmingham launched an ambitious scheme to supply fresh drinking water for its growing population. Local water supplies at the time were inadequate and often unclean, resulting in regular outbreaks of cholera and typhus.

The plan entailed the creation of a reservoir system 75 miles away in the Elan Valley of northern Wales, just west of Rhayader. The Elan and Claerwen valleys had a plentiful supply of clean water, perfect for supplying the growing city. In the late Victorian period, the main obstacle was not government bureaucracy but dealing with the lord of the manor, Robert Lewis Lloyd of Nantgwyllt.

The City of Birmingham purchased 71 square miles of land. By a curious twist of history, the tract of land very closely resembled the area granted by Rhys ap Gruffydd (Lord Rhys) to the Cistercian monastery at Strata Florida in 1184.

One minor fly in the ointment as far as the engineers were concerned was that the valleys were not uninhabited. There were some 18 dwellings, scattered farms, a church, chapel, and schoolhouse at Nantgwyllt. No matter; the residents would simply have to leave. 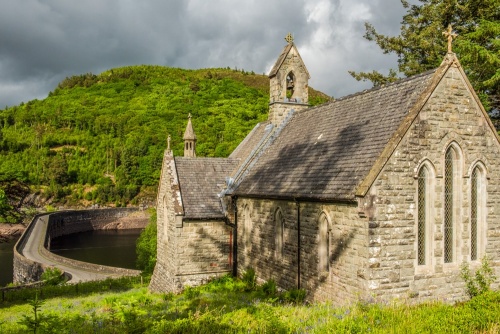 The church and Garreg-ddu viaduct

Some of the furnishings of the existing medieval church at Nantgwyllt were removed to St Bride's Church in Cwmdauddwr, near Rhayader. Among these furnishings was a memorial to Emmeline Lewis-Lloyd, a famous 19th-century mountaineer and the 8th woman to climb Mont Blanc.

The old church, along with the manor house and nearby cottages, were enveloped by the waters and lost forever when Caban Coch dam was built. Among the lost houses was Cwm Elan, once the home of poet Percy Bysshe Shelley's uncle. Shelley visited on several occasions and fell in love with the area. In 1812 he tried to buy Nantgwyllt House, as a home to settle into with his wife Harriet.

The old church at Nantgwyllt may have been lost, but in 1898 a new church was begun on high ground overlooking the Garreg-ddu viaduct. The architect was Stephen W Williams, who also built Elan Village to house workmen labouring to build the dams. The new church was erected at the southern end of the viaduct. 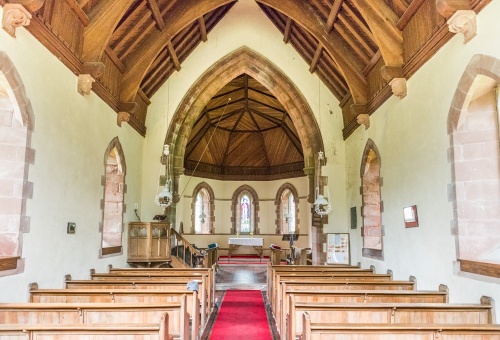 Inside the church, looking east

Work began in 1898 and was finished in 1903. Williams made certain that his contributions would be remembered; inside the church, he designed sculptured corbels depicting himself, water engineer James Mansergh, Anthony Lees (Secretary of the Water Department) and Alderman Lawley Parker (Chairman of the Birmingham City Council Water Committee).

The church was more than a practical replacement for the lost medieval church' it was carefully sited to achieve maximum aesthetic impact, aligning with the viaduct and the Foel valve tower at the north end of the viaduct to create a picturesque scene.

Though most of the church is early 20th century some of the furnishings from the old church survived, most notably the oil lamps that offer the only source of interior light. Inside the church is a small exhibition on the building of the Elan Valley dams and the construction of the church.

There are just a few memorials salvaged from the old church. One is a large tablet to Thomas Lewis Lloyd (d 1782). Another tablet is to John Pickering, church organist and workman on the dam project. The tablet was erected by his fellow workmen when Pickering died in 1904. The most poignant memorial is the smallest; a tiny plaque to Tommy Jenkins, aged just 16, who died while working on the dam in 1904. 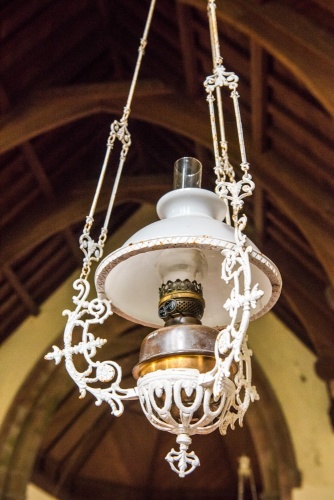 One of the original oil lamps

The church is open 24 hours a day 365 days a year. It is well worth visiting if only for the stunning location, especially in autumn when the colours on the surrounding hillsides are at their best. Getting there is easy. Just take the B4518 to Elan Village and continue following the minor road past the village and the visitor centre until you cross over the viaduct.

You will see the church just ahead on the far bank. There is a small parking area with picnic tables by the southern end of the viaduct and from there it is a very quick walk to the church.

There is a wooden bench in the churchyard, perfectly placed to sit and look out over the viaduct. It is a wonderful place to reflect on the remarkable engineering work that created the Elan Valley reservoirs and wonder what it looked like before the waters flooded the valley. 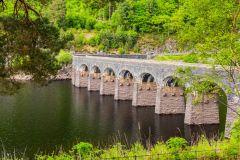 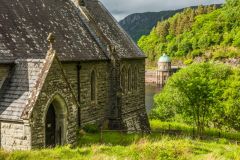 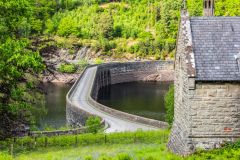 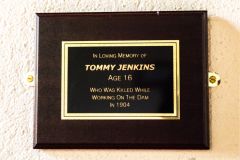 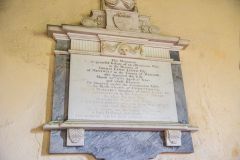 More self catering near Nantgwyllt Church