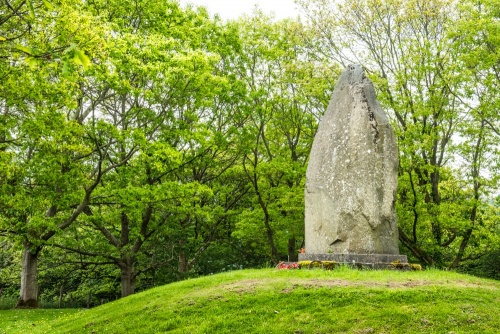 A monument at Cilmeri, west of Builth Wells, marks the spot where the Welsh hero Llywelyn the Last was ambushed and killed in 1282.

Llywelyn (Llewelyn) ap Gruffudd was the last true Prince of Wales before that title was re-used by Edward I and came in time to be given to the male heir to the English throne. Llywelyn was born in 1223, the second son of Gruffudd and the grandson of Llywelyn the Great, Prince of Gwynedd.

Llywelyn's father Gruffudd was Llywelyn the Great's eldest son, but he was illegitimate, so when the elder Llywelyn died in 1240 the title passed to his younger brother Dafydd ap Llywelyn. Dafydd initially kept Gruffudd prisoner, then under pressure gave his custody over to Henry III of England. Gruffudd was held in the Tower of London. He attempted to escape from a high window in the Tower but fell to his death in the attempt.

After Gruffudd's death, Dafydd rebelled against Henry III, and Llywelyn joined the rebellion. When Dafydd died without an heir in 1246 Llywelyn seized his opportunity and had himself named became Prince of Gwynedd.

Llywelyn and his uncle Owain signed the Treaty of Woodstock with Henry in 1247, dividing Gwynedd into two parts. They held the western part while Henry ruled the part east of the River Conwy.

The peace proved to be temporary, however, for when Llywelyn's younger brother Dafydd reached adulthood Henry gave him part of Gwynedd. Llywelyn objected, but Owain formed an alliance with Owain against him. Llywelyn defeated his uncle and brother at the Battle of Bryn Derwin in 1255 to become sole ruler of Gwynedd Uwch Conwy (Gwynedd west of the Conwy).

Llywelyn then crossed the River Conwy and 'invaded' the area controlled by the English. A convoluted period of alliance and counter-alliance ensued, but by 1258 Llywelyn had gained the upper hand and began to style himself Prince of Wales. Some welsh lords did homage to Llywelyn, but others, including his brother Dafydd, sided with Henry III and the English.

With Henry weakened by the Barons' War and the temporary rule of Simon de Montfort, Llywelyn pushed the English back. His success forced Henry to sign the Treaty of Montgomery in 1267, acknowledging Llywelyn as Prince of Wales.

Unfortunately, Llywelyn faced opposition within his own country, particularly from the princes of southern Wales. He did not help his own cause by becoming increasingly ambitious for expanding his territory.

He also faced treachery from within his own family. His younger brother Dafydd conspired to have him assassinated, and when the attempt failed he fled to refuge in England at the court of Edward I, who had succeeded to the throne on the death of his father Henry III. Edward supported Dafydd in carrying out raids on Llywelyn's territory, so it is not surprising that when Edward called on Llywelyn to come to Chester in 1277 to pay homage the Welsh leader refused.

Edward declared Llywelyn a rebel and gathered an army to invade Wales. Many Welsh lords supported the invasion. Edward captured Anglesey and eastern Gwynedd, forcing Llywelyn to agree to the Treaty of Aberconwy. There was a temporary truce, and Edward even agreed to Llywelyn's marriage with Eleanor de Montfort, daughter of his great enemy Simon de Montfort.

Like previous truces, this one was short-lived. The Welsh became disillusioned with English rule and rebelled, but this time the leader of the rebellion was Llywelyn's brother Dafydd ap Gruffudd. Llywelyn probably played no part in launching the rebellion, but he felt obliged to support his brother. He joined the revolt and declared war on Edward on behalf of all the Welsh. 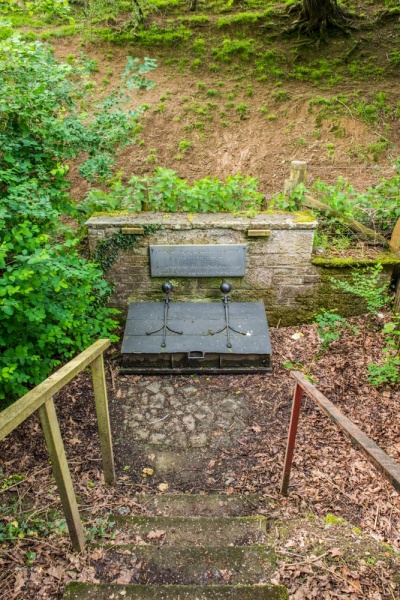 Steps down to the well

Edward seized the initiative and captured Anglesey before sending troops south to subdue any of Llywelyn potential allies. Llywelyn raised a force of men and marched south in an attempt to rally support among the Marcher Lords, many of whom only nominally supported the English. One version of this march suggests that Llywelyn was tricked; lured south from his mountain stronghold by the promise of support from the kingdom of Brycheiniog, what is now Brecon.

On 11 December 1282 Llywelyn met the English in the Battle of Orewin Bridge at Cilmeri, 3 miles west of Builth Wells. Llywelyn's army is thought to have numbered 7000 infantry and a handful of cavalry. Llywelyn was not present when the battle broke out, having gone to Builth Wells to rally support amongst local leaders. Another version of the tale says that Brycheiniog fled to Builth to seek shelter at the castle but was turned away.

The English routed the Welsh, forcing them to flee. When Llywelyn heard the news he rushed back to Cilmeri, arriving on the fringe of the battlefield where he was attacked and killed. The exact circumstances of his death are unclear. One account gives credit to an English man-at-arms named Stephen de Frankton.

What is clear, however, is that the English do not seem to have realised who they killed, possibly because Llywelyn had travelled in secret to his meeting in Builth Wells and was not wearing any obvious coat of arms. That would suggest that his death was pure bad luck. Another account suggests that Llywelyn was betrayed by one of his followers.

When Llywelyn's body was finally identified on the day following the battle his head was cut off and washed in a nearby well. The head was sent to London to be exhibited in public as proof of his death. It was paraded through the streets before being stuck on a stick at the Tower of London, where it stayed for 15 years.

After Llywelyn's death his brother Dafydd carried on the rebellion for several months before he was betrayed to the English and executed as a traitor.

Llywelyn's death effectively ended organised resistance to English rule in Wales and any real claim to Welsh independence died with Llywelyn. His court poet wrote a moving elegy in which he compared his lord's death to the world ending, and claimed that all the children of Wales were crying. He can be forgiven his bias, but in truth Llywelyn was never a leader of all Wales, he was a Prince of Gwynedd, and his attempt to claim all of Wales was resented by other Welsh princes. 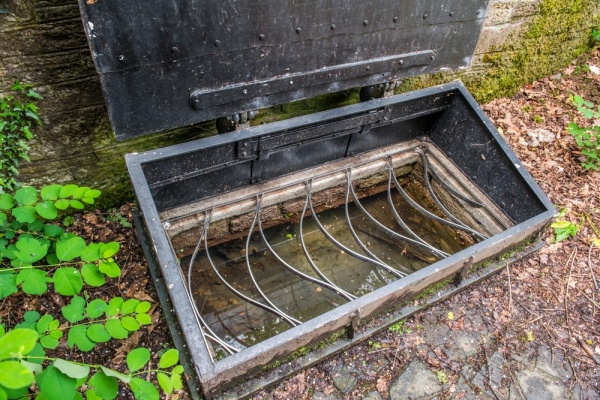 In 1902 Squire Blyth raised a monument at Cilmeri, near the traditional site of Llywelyn's death. In 1956 this monument was taken dow and replaced by a large monolith on a small hillock. The original 1902 memorial stones were incorporated into steps rising to the new monument.

On either side of the steps are inscribed stones in English and Welsh reading 'Near this spot was killed our Prince Llywelyn 1282'. The monolith stands in a small clearing surrounded by trees.

At the far side of the clearing a path leads to a set of steps down to the well where Llywelyn's head was washed.

The well is now protected by a metal cover, but you can lift the cover and expose the water beneath. Behind the well is a slate slab inscribed in Welsh and English with the phrase, 'Legend has it that this is the well wherein the head of Llywelyn ap Gruffydd was washed'.

The monument is on the south side of the A483 at the western edge of Cilmeri. There is a layby with space for 4-5 cars. It is a peaceful place, despite the constant traffic along the road. I found the atmosphere very moving. It is obviously a place of importance to many people, and I noticed a small Welsh flag at the base of the monolith along with several wreaths. 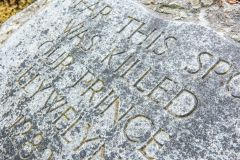 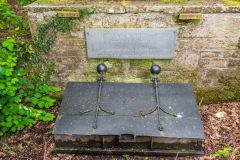 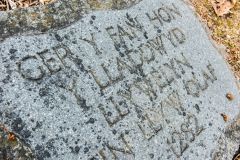 More self catering near Llywelyn the Last Memorial

More bed and breakfasts near Llywelyn the Last Memorial

Self Catering near Builth Wells