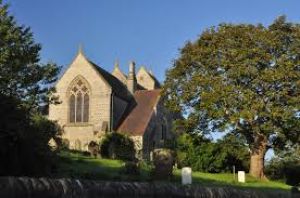 Penarth, St Augustine Church
St Augustine's was built in 1866 to replace a ruinous medieval church. Built of grey limestone by William Butterfield, it is considered a masterpiece of Victorian Gothic, with a stunning polychromatic interior. The church has a saddleback tower copied from the old church on the site.

There was a small medieval church at Penarth, built as early as 1242, but in 1866 the Countess of Pembroke brought in architect William Butterfield to design a completely new church on the site. Butterfield (1814-1900) was one of the foremost exponents of Victorian Gothic architecture, recreating the splendour of 14th-century medieval style, and was known for his use of polychromatic colour schemes.

The result of Butterfield's work at Penarth is a superb example of Gothic Revival, and one of his finest churches. It has been described as a 'love poem' in stone.

The church interior has hardly changed at all since work was completed in 1866 and provides a fascinating glimpse into the Victorian mindset. Colours dominate the interior, with shades of black, red, cream, pink, and ochre blending into a harmonious whole.

The polychromatic scheme extends to the exterior, with Bath stone dressings highlighted by contrasting pink stone from Rhayader. The tower with its saddleback roof is exceptionally striking; no wonder it served as a beacon for sailors.

A later addition is the 1920 war memorial, made with Italian walnut and created by John Batten. In the Lady Chapel is a medieval churchyard cross, brought inside the church to protect it from weathering. Only one of the four facets of the cross=head can be clearly seen; it depicts a Crucifixion scene.

There is a very fine organ built in 1895 by the William Hill & Son company.

In the churchyard is a memorial to Dr Joseph Parry (1841-1903), one of the most famous Welsh composers. Among other works, Parry was responsible for 'Blodwen', thought to be the first opera composed in the Welsh language.