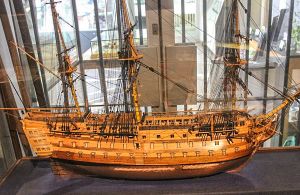 Monmouth Museum
Monmouth Museum is home to a wonderful collection of memorabilia from the life of Admiral Horatio Nelson, including personal letters, pictures, weapons, and commemorative ceramics. There is also a large collection on Monmouth heritage including the only Monmouth Cap in existence.

This fascinating museum, housed in the old Market Hall building, combines local history with the story of Britain's greatest naval hero, Admiral Nelson. Nelson visited Monmouth, and the connection is remembered is a wonderful collection of personal objects covering his naval career, his tumultuous personal life, his death and its aftermath. Among the objects on display are Nelson's own 'fighting sword' (as compared to his ceremonial sword used for official functions).

See personal letters and a wealth of commemorative material produced to celebrate his victories and to mourn his death, including a pair of carved nautilus shells. Among the most fascinating objects is a glass eye purporting to belong to Nelson. Its a forgery, of course, for Admiral Nelson lost his sight on one eye but never lost the eye itself!

Others items with a better provenance include the table used by Nelson when he dined at The Kymin, on the outskirts of Monmouth. See letters between Nelson and his wife, and between Nelson and his mistress, Lady Emma Hamilton. Other items include models of the Battle of Trafalgar, prints, paintings, pottery, and silverware commemorative pieces.

The collection of Nelson memorabilia was assembled by Georgiana Rolls, Baroness Llangattock. Lady Llangattock was the mother of Charles Rolls, best known as one half of the Rolls-Royce team. There is an archive of documents relating to Rolls, including a collection of driving medals. Learn about the life of this early motoring pioneer, his adventures in hot air ballooning, aeroplanes, and the Rolls-Royce links to Monmouth.

Exhibits covering the history of Monmouth include an original 16th century Monmouth Cap, the only example known in existence. This type of knit woollen cap was popular in the late medieval and Tudor periods and was often used by sailors and soldiers. There is a wealth of material on local history, including historic finds in the area, from prehistory to the first Roman fort in Wales.

More self catering near Monmouth Museum >>