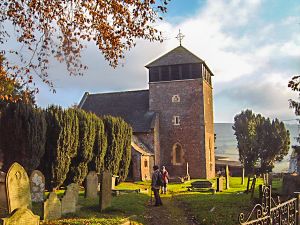 The first church on this site was probably built in the 7th century. Records show that Cynfwr ap Lago granted both the church and the village to Llandaff church. The document of the grant makes for a fascinating insight into the period, for it states that Cynfwr ap Lago purchased the property at a cost of one hawk, a good horse, a second horse worth 3 cows, a useful dog worth another 3 cows, and 'the value of 12 cows'.

The church was linked with the nearby manor from the 16th century, and the living was in the hands of the Milborne family. John Milborne, High Sheriff of Monmouthshire, supported Parliament in the Ciil War. Royalist soldiers occupied Wonastow Court manor house and used St Wonnow's to stable their horses!

The earliest parts of the present building date to a rebuilding in the 12th century. The chancel is in Perpendicular style, suggesting a 15th century date. The roof, supported on 4 hammerbeam braces, is certainly medieval.

Near the altar is a memorial to John Milborne (d. 1637) and his wife Christian. Effigies of the couple have been destroyed, but the tomb still bears carvings of the couple's 4 sons and 7 daughters, kneeling in an attitude of prayer. On the wall at the west end of the nave is a funeral hatchment to George Milborne, Esq. There are 2 18th century church bells, kept in the vestry, one cast in 1769, the other in 1778.

The church is unfortunately normally kept locked, but you can obtain the key by prior arrangement with the vicar.