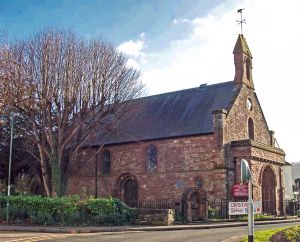 Monmouth, St Thomas the Martyr Church
Dedicated to Thomas Becket, Archbishop of Canterbury and built shortly after Becket's death in 1170. Restored in 1830 when a turret was added. Though essentially a Victorian building, the church retains its Norman chancel arch, piscina, and a pair of 12th century doorways.

The first written record of a church here comes from 1186 when it was mentioned in a Papal Bull issued by Urban III. That means the church must have been built after Becket's death but prior to the Papal Bull. It is also possible that there was an earlier building on the site which was rebuilt or simply rededicated to Becket after his death.

In 1233 the church was damaged during the Battle of Monmouth, when a group of rebellious barons rose against Henry III. The king must have felt some responsibility for the damage, for in the following year he ordered the Constable of St Briavels to give 13 oak trees from the Royal Forest of Dean to help repair the church.

In 1256 there is a mention of anchorites living at St Thomas'. The anchorites would have had a small cell attached to the church where they would dwell in isolation, yet could receive alms from passers-by.

The historical record then goes silent save for a few tantalising references. The church must have fallen into disrepair, for in 1479 the Bishop of Hereford granted an indulgence (a document granting remission of sins) to anyone giving money to repair the church.

After the Reformation Monmouth lost several of its parish churches, but St Thomas somehow survived, and in 1830 a major rebuilding took place under architect TH Wyatt. Wyatt's uncle worked for the Duke of Beaufort, and Wyatt obtained oak for new pews and galleries from trees on the Beaufort estates. Another major rebuilding took place in 1889, and the combined effect of these Victorian works is that many of the medieval features were lost.

What did survive, however, is the Norman chancel arch; an excellent example of 12th century architecture. A Norman piscina is set into the south wall, and a pair of Norman doorways are set in the north wall.

There are two fonts; one in pillar style carved with a depiction of the Garden of Eden, complete with human figures, birds, and serpents.

More self catering near Monmouth, St Thomas the Martyr Church >>