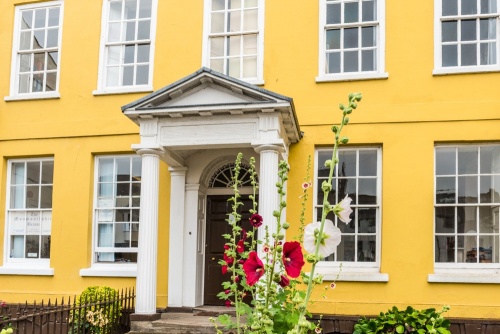 Cornwall House is a lovely Georgian townhouse that was formerly the home of the Llangattock family and later served as the offices for the Monmouthshire Beacon newspaper. The house is of red brick with whitewashed stone dressing. It stands three storeys high, including attics.

Cornwall House dates to the 17th century, though it may incorporate bits of older buildings. It stands on the site of three burgage plots (long strips of land running back from Monnow Street) known to have been merged into one plot of land by the 16th century, when an inn stood on the spot.

Records show that in 1678 a building known as Great House occupied the site. In 1752 Henry Burgh, a land agent for the Duke of Beaufort, rebuilt Great House in Queen Anne style. His work shows on the brick frontage facing the garden, which was the front of the house at that time. 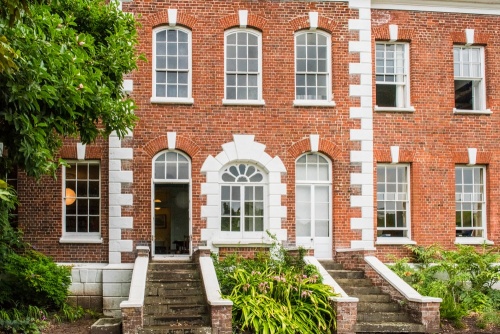 The walled garden once held a grandstand where the Duke could entertain friends while they watched horse racing on Chippenham Fields, beyond what is now the back wall of the garden.

In the late 18th century the house was 'turned around' and the facade looking onto Monnow Street became the front. This facade is in an elegant Georgian style, set well back from the road behind an ornate railing to create a small forecourt area. Over the ironwork gateway is an elegant 18th-century lampholder.

The Monnow Street frontage was created around 1770, with the addition of a later porch and side doors with neo-classical columns in Doric style.

The two faces of Cornwall House are so strikingly different that you would never imagine they were part of the same house. 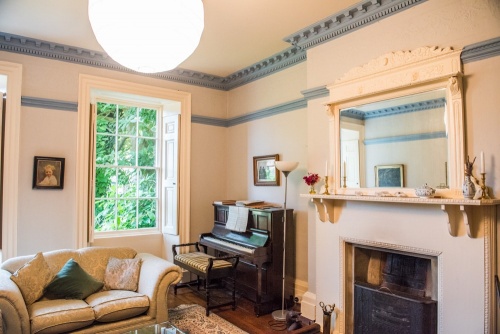 Sometime in the 19th century, the house was subdivided with an internal wall to create two sections, with extensions on either side. The extension on the left gives access to the offices of the Monmouthshire Beacon newspaper, while the extension on the right houses the Cornwall House kitchen.

Many features of the original interiors are intact, including an elegant 19th-century staircase. Behind the house is a lovely small garden containing the original walled kitchen garden.

We had a very enjoyable, though short, tour of the house from the owner, who told us about the complex history of the house and how it was altered over the centuries. She showed us several ground floor rooms, the back garden and walled garden, and took us upstairs to the restored bedchamber at the top of the house. 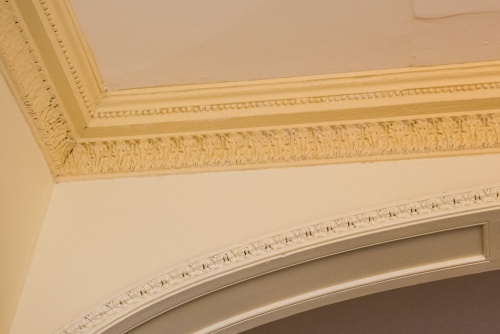 One of the features our guide pointed out was the beautifully carved decorating the stairwell and first-floor landing. Part of the carving had been restored, brought to life after having layer after layer of paint carefully stripped away. The contrast between the carving that had been revealed and the sections still buried beneath centuries of paint was startling.

Another feature our guide pointed out was the original plank floorboards in the top-floor bedchamber. The planks were in beautiful condition, but sloped distinctly across the room.

Cornwall House stands near the western end of Monnow Street, the main shopping street in Monmouth. There are several paid parking areas nearby. We parked just off St Mary Street and it was a pleasant 5-minute walk to the house. 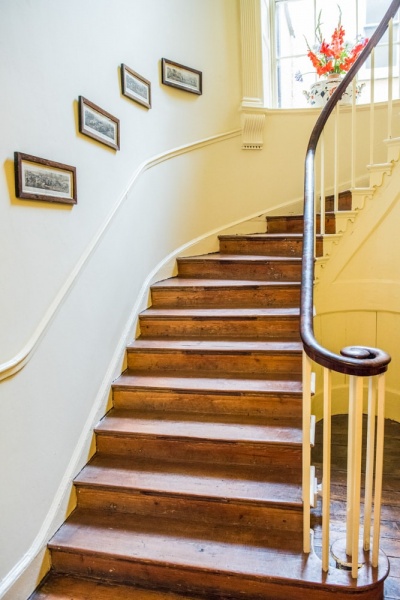 Make sure to go up the central path to the main entrance, rather than the path that leads to the newspaper offices on the north-eastern side of the house. That's what we did by mistake, and I got the impression from the woman who directed us to the correct entrance that a lot of people make the same error.

NOTE
Cornwall House is owned by the same family that owns Treowen, a lovely Jacobean manor house located 4 miles west of Monmouth. Both houses are usually open at the same times, and it is well worth the effort to visit both houses at the same time. The houses represent different periods in history and it is extremely enjoyable to compare and contrast the two. 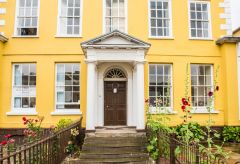 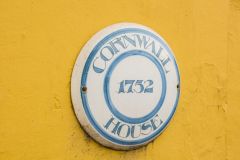 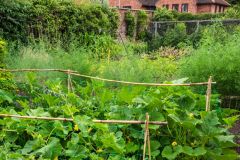 More self catering near Cornwall House >>