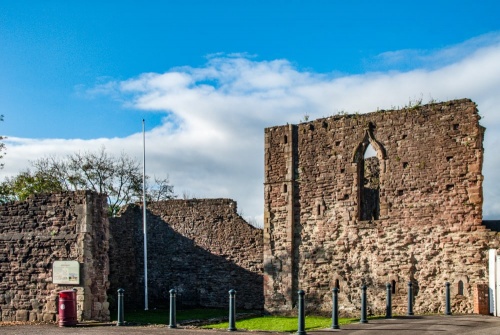 Monmouth Castle was built between 1067-71 by William fitz Osbern, but its most famous moment in history came in 1387 (the exact date is uncertain), when the future Henry V was born here. A 12th-century tower and 13th-century great hall are the best surviving features, in addition to short sections of the castle walls.

Fitz Osbern chose a hilltop site overlooking the confluence of the River Wye and the River Monnow. The first castle was little more than a timber fortification protected by earthworks. Monmouth Castle was one of the most important castles in the Welsh Marches, the buffer region between England and Wales presided over by powerful barons who exercised an almost regal authority.

Sometime during the Anarchy - the 12th-century civil war between supporters of King Stephen and Queen Maud - the timber fortress was augmented with stone defences.

The castle was captured briefly by Simon de Montfort during the Baron's War but eventually passed to Edmund Crouchback, Henry III's second son and the 1st Earl of Lancaster. Crouchback added the Hall and strengthened the defences. as the castle grew, so did the town that developed around it. 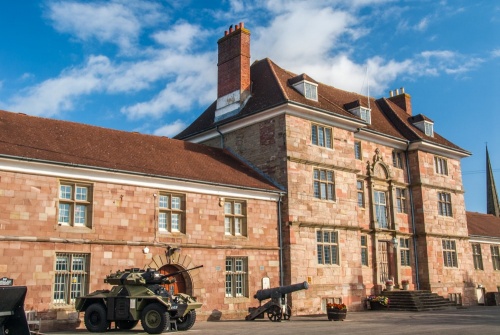 A town wall and fortified bridge were added to the combined defences of the castle and town. The deposed King Edward II was held here before being transferred to Berkeley Castle and his eventual death, and Monmouth Castle later served as one of Henry Bolingbroke's favourite residences before he took the throne as Henry IV. Sometime in 1387 Henry's first wife Mary de Bohun gave birth to a son at Monmouth Castle, a son that would later take the throne as Henry V.

Over time the castle's military importance waned and the outer bailey was used as a market place called Agincourt Square in honour of Henry V and his victory at the Battle of Agincourt in 1415. The Great Hall was used for the Monmouthshire Assizes.

The castle changed hands three times during the Civil War. The final time saw it captured by Parliamentary troops. In 1646 Oliver Cromwell visited Monmouth and ordered the castle to be 'slighted' so that it could no longer be used for military purposes.

The castle was partially destroyed in 1647, and a residence known as Great Castle House was built on the site of the round tower in 1672-3. Great Castle House is now home to Monmouthshire Royal Engineers, and there is a regimental museum tracing the history of the regiment from its inception in 1539.

A small section of the museum records the early defences of Monmouth and its castle. Also on the site is a recreated medieval courtyard garden with herbs, called the 'King's Garden'. The castle remains are roughly oval, about 140 metres long and 90 metres wide, with steep cliffs to one side. 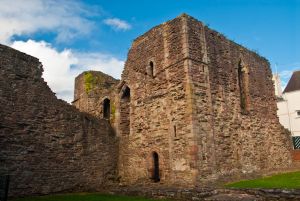 More self catering near Monmouth Castle >>