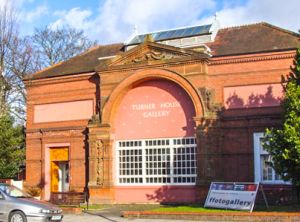 Turner House Gallery
Turner House Gallery is now operated by Ffotogallery, who specialise in the presentation and interpretation of photography in Wales. The gallery is an important venue for the exploration and enjoyment of the photographic arts.
History
In 1888 a wealthy businessman and philanthropist named James Thompson had the idea to erect a public art gallery in honour of painter JMW Turner. the gallery has never owned any paintings by Turner, it is simply named in his honour.

Thompson's philosophy was simple; he wanted the largest number of people possible to be able to view exhibits at museums and galleries on one day, and that day was Sunday. As a consequence, the Turner Gallery became known as 'The Sunday Gallery'. Another of Thompson's beliefs is that the museum should offer free entry to everyone; he wanted to make art accessible to every social class, not just the elite.

The gallery opened its doors to the public in June 1888, with an exhibit drawn from Thompson's private art collection. Among the works on show in the opening exhibition included works by the Pre-Raphaelite Dante Gabriel Rosetti as well as, inevitably, paintings by Turner himself.

The gallery building was designed over two stories, with accommodation for a live-in custodian on the ground floor and exhibition galleries on the first floor.

Thompson kept adding works to the collection until his death in 1897. On his death the museum continued to operate, but without his enthusiastic support the number of visitors dwindled, and in 1921 the gallery and its contents were given to the National Museum of Wales on the understanding that Turner House would showcase artwork from the Museum's reserve collection.

Then in 2003 the registered charity Ffotogallery leased the gallery as a showplace for the photographic arts. The charity offers regular courses in addition to its gallery displays.

At any one time there are usually two exhibitions of photography and 'lens based media' on display, and the exhibitions change regularly and last anywhere from a few weeks to several months. Most exhibitions are by Welsh-based photographers, or have some aspect of Welsh interest.