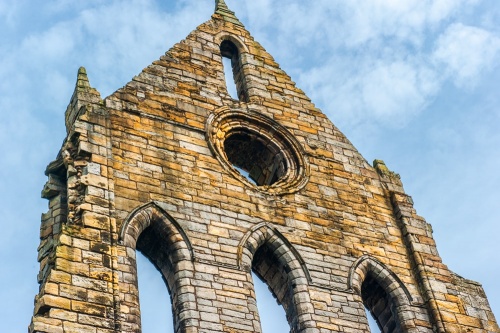 Kilwinning Abbey is a Benedictine monastery founded sometime around 1162. A rich, flourishing monastery for 400 years, it once covered several acres. The great west doorway, south wall of the nave and the gable of the south transept are beautifully preserved.

Kilwinning was probably established by Richard de Morville between 1162 and 1189 as a daughter house of Kelso Abbey. The first monks were members of the Tironensian order (associated with the Benedictine rule), but they were coming to a site that had been in use for Christian worship for at least 400 years.

The original church at Kilwinning was dedicated to St Winnan, sometimes known as Finnian. Winnan (d. 579 AD) was a teacher of the young St Columba. The only remnant of the first church at Kilwinning is a carved 10th-century cross, now on show in the North Ayrshire Heritage Centre in Saltcoats.

At its height, the abbey supported some 40 monks, but by the middle of the 16th century there were only 16 in residence. 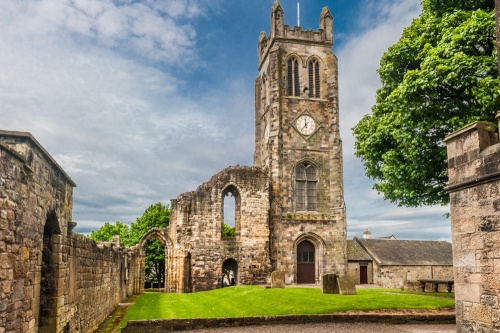 Despite the size of the abbey, it appears that the monastic buildings were never finished. Many of the buildings were pulled down at the time of the Reformation, perhaps at the instigation of the Earls of Argyll and Glencairn, and by 1591 much of the site lay in ruins.

The east end of the monastic church was repaired and used as a parish church, but then this, in turn, was pulled down and replaced by the present parish church in 1775.

The most striking part of the abbey ruins is the north-west bell tower. This seems to have been detached from the body of the church right from the start. It was struck by lightning in 1805 and fell down a few years later. It was then replaced by the current bell tower, but several features of the medieval tower were retained, including several rather amusing grotesque faces above the doorway.

The bell tower has been refurbished as a local heritage centre which is staffed by volunteers and open seasonally.

Aside from the tower, the best-preserved parts of the abbey ruins include the chapter house, fronting onto a small cloister walk, and the east processional doorway from the cloister to the church. This lovely doorway replaced the original arch, which was blocked and turned into a book cupboard. 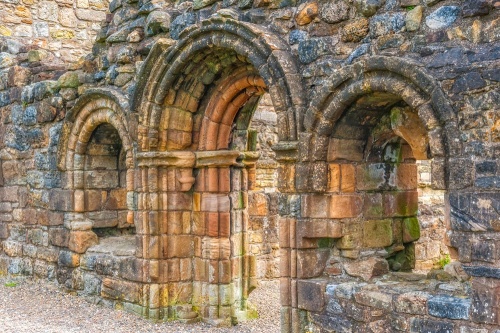 Entrance to the Chapter House

There are only partial remains of stone walls along the south and west sides of the cloister, and sections of the south-west tower and west transept of the abbey church. Aside from those partial remains the most impressive feature at Kilwinning is the restored south transept wall with its large lancet windows, which stands to its full height.

This rather remarkable structure dominates the abbey ruins; I kept looking up at it, wondering how on earth it was still standing.

The site is not large and should take no more than 30 minutes to explore. 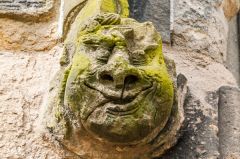 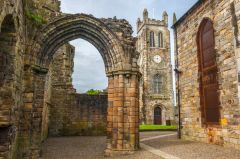 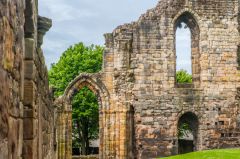 Nearby accommodation is calculated 'as the crow flies' from Kilwinning Abbey. 'Nearest' may involve a long drive up and down glens or, if you are near the coast, may include a ferry ride! Please check the property map to make sure the location is right for you.

More self catering near Kilwinning Abbey >>