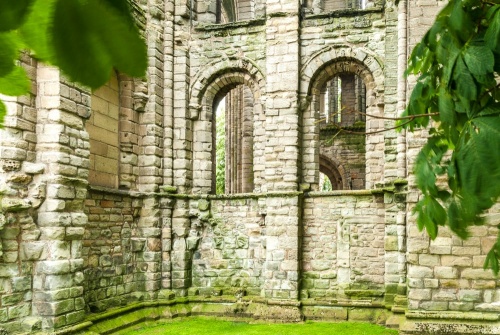 It is hard to imagine it when you see the fragmentary remains of Kelso Abbey today, but it was once the richest and most influential abbey in the Borders. Around 1113 a group of Tironensian monks founded an abbey near Selkirk under the patronage of David I, then Prince of the Cumbrians.

Around 1128 the abbey moved to Kelso, possibly because David, now king of all Scotland after the death of his brother Alexander I, was establishing a new administrative centre here at the confluence of the rivers Tweed and Teviot.

Construction on a new abbey church began immediately, and it was dedicated in 1143. King David's son, Henry, Earl of Northumbria, was the first notable burial in the church, in 1152. 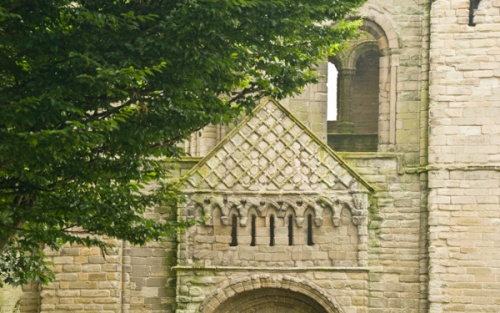 King David's new Royal Burgh of Roxburgh was intended as the administrative centre for southern Scotland, and the abbey's location led it to become the most powerful in the Borders. Kelso Abbey owned huge estates in the Borders, and the wealth poured in.

They had 34 churches under their control, and owned granges, mills, fisheries, salt-works, and breweries in estates stretching from Aberdeen to Ayr. Unfortunately, that prosperity was not to last.

The abbey's location close to the English border made Kelso an easy target for the armies that fought back and forth across the region during the early 14th century Wars of Independence. The abbey had to be repaired on several occasions after military action.

In 1460 King James II died while besieging Roxburgh Castle, almost within sight of the abbey walls. The king's baby son was baptised as James III in a hastily arranged ceremony in the abbey church. 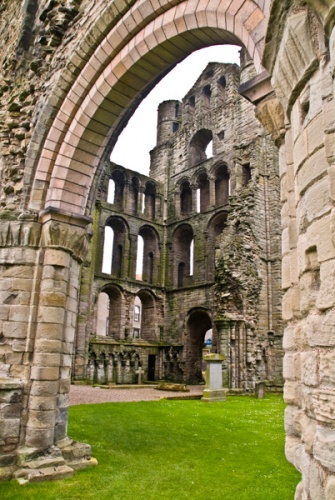 Within the abbey church

There were further English attacks in the 16th century as Henry VIII pursued his 'Rough Wooing' of Scotland. The abbey was badly damaged by Henry's troops under the Earl of Hertford as part of a deliberate campaign targetting the major monasteries of the Borders. Then in 1560 the Scottish Reformation effectively ended monastic houses in Scotland.

It seems that a small group of monks refused to accept the end, and stayed on in the abbey for several years, but by 1587 the abbey was derelict. In 1607 the last Commendator of the Abbey, Robert Ker, was granted lordship of Kelso as a secular estate. The monastic buildings were robbed for building stone, though for a time a parish kirk was established within the west transepts. This kirk included a gaol.

Both gaol and kirk were cleared away in 1805, leaving the west tower and transept as the only surviving part of the medieval abbey. The final transformation at Kelso took place in 1933, when a small memorial cloister to the 8th Duke of Roxburgh was added in the style of the 12th century original.

I usually don't have a high opinion of 'mock' Romanesque of Gothic architecture, but I found the Roxburgh cloister quite lovely; the contrast with the ruined medieval part of the church is striking, but the cloister exudes a sense of peace and gives perhaps a glimpse of what the entire abbey might have looked like when it was new.

The remains are so scanty that it is somewhat difficult to get a real sense of just how impressive medieval Kelso Abbey must have been, but if we realise that the standing west tower was just one part of the abbey church and that it, in turn, was surrounded by cloister ranges and ancillary monastic buildings, you can start to get an idea of just how imposing it must have looked to a medieval traveller fetching up at the abbey gates.

There would have been two towers and two crossings, in a double cruciform layout that was unusual if not unknown in Britain. The architecture is mostly 12th century Norman, mixing earlier rounded arches with newer pointed Gothic style.

The abbey is under the auspices of Historic Scotland and there is no charge for entry. The Roxburgh memorial cloister was locked the first time I came to Kelso, but the exterior of the church was easily accessible. 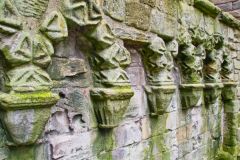 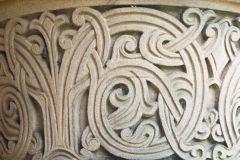 More self catering near Kelso Abbey