HERITAGE HIGHLIGHTS:   One of the oldest working grain mills in Scotland 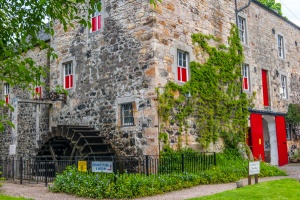 Three heritage attractions in one, Dalgarven Mill is a historic restored water mill, local history museum, and museum of historic costume. From the main cluster of mill buildings, trails lead through a nature reserve, along the old mill stream and beyond.

There has been a mill at Dalgarven since at least 1203 when the monks of Kilwinning Abbey established the 'Waulk Mill' on this spot. In 1614 a new mill was built nearby, and 8 years later the Blair family of Blair purchased both mills.

The Blairs owned the property for exactly 300 years until it was sold to the Ferguson family. But before the Ferguson's came along the original grain mill was badly damaged in a fire in 1869. The last working miller was John Ferguson, who retired in 1969.

When John's son Robert took over the mill site in 1983 the buildings were almost derelict. The story of how the mill was restored and brought back to life has been retold in a book rather cleverly titled 'The Miller's Tale', on sale in the mill shop.

The collection of buildings, including byres, barns, and cottages that cluster around the main mill building all date from the major rebuilding project that followed the 1869 fire.

Powered by a six-metre-high undershot water wheel, the milling machinery at Dalgarven rises up through four floors of fully functioning gears, pulleys, and shafts. This is among the tallest - and oldest - grain mills in Scotland, a testament to the engineering skill of our ancestors. The machinery is not all original to Dalgarven; much of it was rescued from a mill in the Scottish Borders. 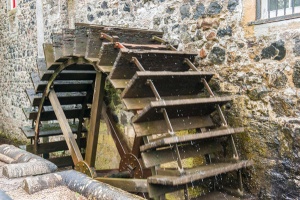 The undershot water wheel in action 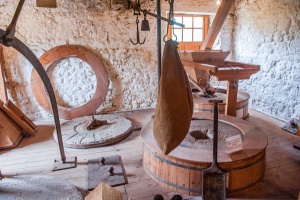 Grindstones inside the mill

One of the most unusual items on show is a royal proclamation dated 1917, which asks all British subjects to aid the war effort by cutting bread consumption by one quarter and stop using flour. Twenty thousand posters proclaiming the edict were printed before the government decided to rethink the concept and the proclamation was cancelled. However, five posters had already been sent out, and one of these five is now on display inside the mill.

Three floors of the old mill building, which once held sacks of grain, are now used as an intriguing museum of country life, telling the story of life on the land in rural Ayrshire through the ages. There is a vast array of agricultural machinery, tools, old photographs, and objects from everyday life. There is a recreated dairy, laundry, and tool store, and an area to display rural crafts.

One of the most appealing things about the Country Life Museum at Dalgarven is how the owners have created tableau showing generations of life in their own family. So you can look back up the Ferguson family tree to see what the current owner's grandfather and his family lived like, the objects they used in everyday life at the mill, the furniture they sat in, the pastimes they enjoyed.

It's a fascinating glimpse of social history made all the more interesting because the owners like to take a personal hand in showing visitors around the displays. We were entertained by Mr Ferguson himself, who obviously took great pride in the mill and his family's involvement in its history. 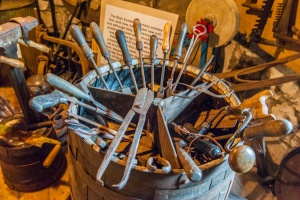 Tools in the rural life museum 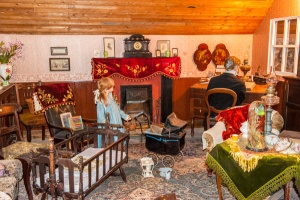 A room tableau in the museum 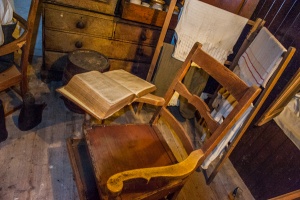 The ground floor of the mill is given over to a display of historic costumes from the early 1800s to the mid-20th century. The collection of clothing boasts over 2,000 unique pieces, so not all will be on display at any one time.

There are examples of men's, women's, and children's clothing, though it must be said that the vast majority when we visited were women's dresses and outerwear.

There are quilts, blankets, lace, pieces of embroidery, bedcovers, shawls, gloves, petticoats, gowns - an embarrassment of clothing objects. Believe me, this is a display you will want to linger over, exclaim at, and wonder at!

One of the most unique items is a Garibaldi shirt made of red cotton, and when we visited there was a special display of silk clothing. There are regular special exhibitions; our visit coincided with a display of Victorian clothing, particularly dresses from 1825-1901, with examples of crinolines, pinafores, bustles, and much, much more.

Upcoming exhibits as of this writing include WWI clothing and the Paisley Pattern. If you enjoy historic costume and fashion, you will love Dalgarven! 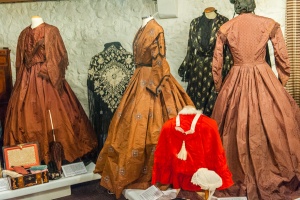 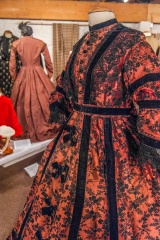 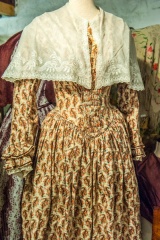 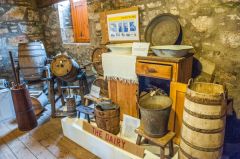 Nearby accommodation is calculated 'as the crow flies' from Dalgarven Mill. 'Nearest' may involve a long drive up and down glens or, if you are near the coast, may include a ferry ride! Please check the property map to make sure the location is right for you.

More self catering near Dalgarven Mill