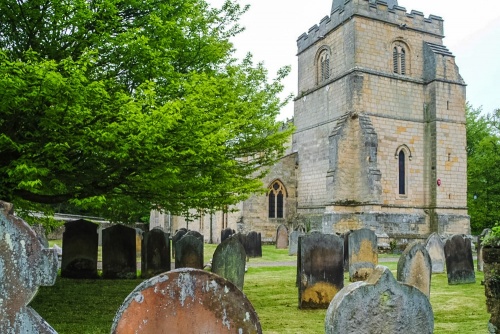 Hackness is a small village west of Scarborough, on the edge of the Dalby Forest Park. The parish church of St Peter's is a fascinating historic building boasting a beautifully carved Anglo-Saxon cross shaft.

The story of St Peter's Church begins in the year 680 AD when St Hilda of Whitby founded a nunnery here. Legend says that when St Hilda died later that year in Whitby the bells of the nunnery church at Hackness tolled. The nunnery was mentioned by the Venerable Bede, writing in the early 8th century.

It isn't clear when the nunnery disappeared but it may have been in AD 867 when Danish raiders ransacked the coast. 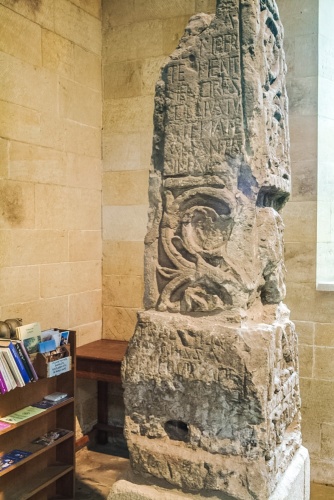 In 1078 the coast was once more ravaged by pirates. The monks of Whitby Abbey fled inland. Some ended up at Lastingham, where they founded a new monastery which later moved to York. Others, led by Prior Serlo de Percy, ended up at Hackness where William de Percy granted them part of his manor, including two churches.

The monastic cell lasted until the Dissolution of the Monasteries under Henry VIII and when it was suppressed there were four monks living there. 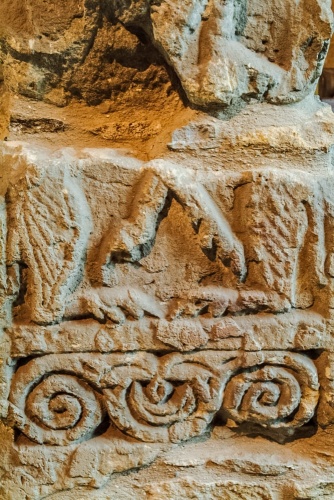 Carving detail on the Anglo-Saxon cross

The historical highlight at Hackness is a beautifully carved cross dating to the late 8th or early 9th century. The cross bears an inscription of a Latin prayer addressed to St AEthelburh. There is also a worn inscription in runic letters and fragmentary carvings of two gryphons. There are also complex geometric patterns in traditional Celtic style. The cross stands 1.75m high (about 5'9").

There are several late medieval misericords, with designs depicting grotesque faces, foliage, grapes, vines, a mask, an angel bearing a shield, a scallop shell, and the Percy coat of arms. There is a Jacobean font and a later Victorian font with a much earlier 15th-century wooden cover. The cover forms an octagonal canopy decorated with crockets and featuring finely carved Perpendicular tracery. 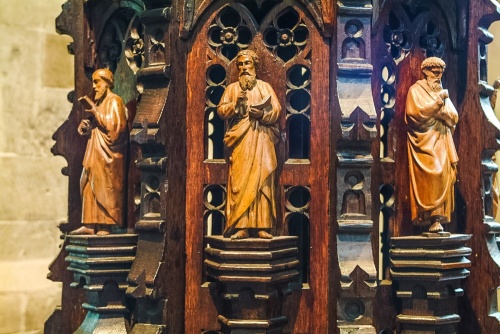 Ove the chancel arch is a funeral hatchment dating to the reign of William and Mary. In the north aisle is a wall memorial to Sir Thomas-Posthumous Hoby, who died in 1640, though the memorial was not installed until 1682.

In the sanctuary is a memorial to Arthur Dakyns (d 1592) erected by Sir Thomas Posthumous Hoby and his wife, Margaret. The Hobys restored the chancel in 1597. On the south wall of the sanctuary is an alabaster tablet in memory of Margaret Hoby (d 1693). 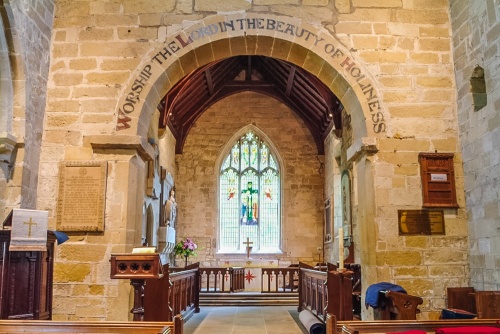 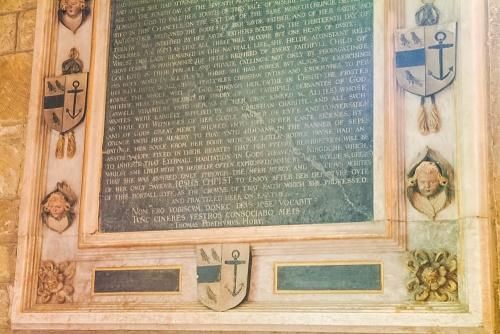 St Peter's church is in the centre of the hamlet of Hackness on the minor road from Suffield. The church is normally open daylight hours for visitors and was open when we visited.

St Peter's Church is a beautiful historic building, full of interest and well worth visiting.